Evacuees resist transfer to place away from papal route 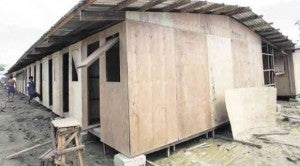 PALO, Leyte, Philippines—Mayor Remedios Petilla of Palo wants to transfer 250 families living in bunk houses in Barangay Candahug to another place five kilometers away so they will not be very visible when Pope Francis visits the town in January.

But the 1,290 residents oppose the transfer because the new bunk houses are not only far from where their children go to school but they also want to have a close look at the Holy Father.

Petilla, mother of Energy Secretary Jericho Petilla and Leyte Governor Leopoldo Dominico Petilla, said the families, who had been staying in the bunk houses in Candahug after their houses were destroyed by Supertyphoon Yolanda on Nov. 8, 2013, would be transferred to other bunk houses in Barangay Tacuranga or permanent relocation sites ahead of the papal visit.

The transfer “is being fast tracked because of the scheduled visit of the Pope next year,” Petilla said.

Municipal officials explained to the affected families that the bunk houses in Candahug would be affected by a “clearing operation.”

But the bunk houses do not obstruct the road even with the ongoing road widening project that will increase the present two lanes to four lanes.

Sources told the Inquirer that Mayor Petilla simply does not want the Pope to see the victims still in bunk houses when he visits Palo on Jan. 17, 2015, to meet with the victims of Yolanda.

Candahug is the first community one sees on entering the municpality of Palo from the Daniel Z. Romualdez Airport in Tacloban City, the prov incial capital of Leyte.

While it is not clear if Pope Francis will pass by the Government Center in Barangay Candahug where the bunk houses are located, the Holy Father is scheduled to go to Palo for at least three activities.

According to a preliminary schedule of activities earlier relayed by Palo Archbishop John Du, Pope Francis will arrive at the Tacloban City airport at 10 a.m. on Jan. 17 and will say Mass on a vacant lot in front of Tacloban airport before proceeding to the Archbishop’s Residence in Palo to dine with the poor.

He will then proceed to and bless the Pope Francis Center for the Poor—a project financed by the Vatican for the care of the elderly, the orphans, and less privileged.

After the blessing, Pope Francis is to go to the Palo Metropolitan Cathedral to address members of the clergy and religious congregations.

He will also bless the newly refurbished Palo Metropolitan Cathedral of Our Lord’s Transfiguration, which was heavily damaged by Yolanda, before returning to Tacloban airport to fly back to Manila.

According to the families, who lived in Barangays Baras, San Fernando and Candahug before their houses were destroyed by Yolanda, they were told to leave their bunk houses by November and transfer to other bunk houses in Barangay Tacuranga, about five kilometers from Candahug.

There are 384 bunk houses in Tacuranga but only 180 are occupied.

“We would not worry if we were to be transferred to a permanent area. But aside from it being far, our relocation will be to another bunk houses. It has been almost a year and we have no assurance about where we will live,” said Evelyn Navarra, 29, a mother of two.

Navarra’s family has been living in one of the bunkhouses in Candahug since February after their house in Baras was washed out by a storm surge generated by Yolanda.

She said the bunk houses in Tacuranga were far from the public school in Baras where her children now study.

Transferring from one bunk house to another would be too much to bear, said Tony Enciñas, 53.

“If they want us to be transferred, then transfer us to a permanent relocation site,” he said.

Municipal social development officer Lina Bardelas said that these families are to be moved either to the bunk houses in Tacuranga or to a permanent relocation site.

The municipal government has identified the village of San Jose where about 500 homes are to be built by the Tzu Chi Foundation and another 169 by the GMA Foundation.

The development of the sites began last month. But no date has been determined for completion of the permanent homes.