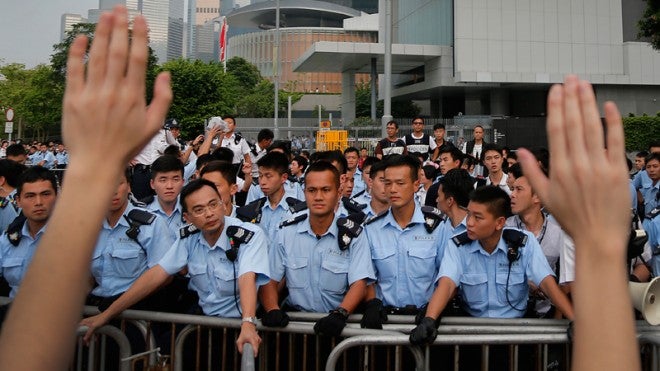 A student protester raises his hands as a gesture of their nonviolent intentions as they resist during change of shift for local police but backed down after being reassured they could reoccupy the pavement outside the government compound’s gate, Thursday, Oct. 2, 2014 in Hong Kong. Hong Kong police warned of serious consequences if pro-democracy protesters try to occupy government buildings, as they have threatened to do if the territory’s leader doesn’t resign by Thursday. (AP Photo/Wong Maye-E)

HONG KONG — Hong Kong protesters on Friday welcomed an overnight offer by the territory’s leader of talks to defuse the crisis over demonstrations seeking democratic reforms, though they continued to demand he resign and maintained barricades around government headquarters, frustrating staff going to work.

Student protesters had threatened to surround or occupy government buildings if Chief Executive Leung Chun-ying did not step down by midnight Thursday, and police had warned of serious consequence for the protesters, who have grown into the biggest challenge to Beijing’s authority since China took control of the former British colony in 1997.

The government said the Central Government Offices would be temporarily closed after some civil servants and other workers arriving for their shifts following a two-day holiday were unable to get past the barricades. It advised workers to follow contingency plans.

It was unclear what kind of compromise the talks might achieve, though they might be part of a strategy to dampen the momentum of the protesters. A front-page editorial Friday in the People’s Daily newspaper, published by China’s ruling Communist Party, underlined the leadership’s unwillingness to negotiate changes to its decision that all candidates in an inaugural 2017 election for chief executive be approved for the ballot by a committee of mostly pro-Beijing elites.

Protesters want open nominations, and also have demanded that Leung — chosen by such a committee — step down.

“What we want to fight for is our freedom, and the free nomination of candidates for our chief executive,” said Ivy Chan, a 25-year-old social worker. She welcomed word of the talks and said she hoped that police would not again use tear gas on protesters as they did last Sunday to disperse huge crowds.

Just minutes before Thursday’s midnight deadline set by protesters, Leung held a news conference to offer the talks, but said “I will not resign.”

Standing beside Leung was the territory’s top civil servant, Chief Secretary Carrie Lam, and he asked her to arrange the talks. She said she would seek to meet with leaders of the demonstrations as soon as possible.

“I hope both sides will be satisfied,” she said. “Students had wanted a public meeting but I hope that we can have some flexibility to discuss details.”

The Hong Kong Federation of Students said in a statement early Friday that they planned to join the talks with the government, focused specifically on political reforms. They reiterated that Leung step down, saying he “had lost his integrity.”

A wider pro-democracy group that had joined the demonstrations, Occupy Central, welcomed the talks and also insisted that Leung quit.

China’s government has been largely silent on the protests, other than to call them illegal and support the Hong Kong government’s efforts to disperse them. However, the People’s Daily has published lengthy commentary on the protests.

On Friday, it said a small group of protesters were attempting “hijack” the system and force changes to the electoral rules to benefit a minority of people. “The core of their efforts to gain so-called universal suffrage is to ensure that their representatives, including those who confront the central government, can become candidates for chief executive.”

It said this effort was doomed to failure, and that there was “no room for concessions” on the candidate screening issue. It reminded that Hong Kong “is directly under the jurisdiction of the central government; it is not a country or an independent political entity.”

When negotiating the handover of Hong Kong from Britain, China’s ruling Communist leaders agreed to a “one country, two systems” that would preserve Western-style civil liberties and broad autonomy, while promising eventual democracy. Protesters say China is reneging on a promise that the city’s top leader will be chosen through “universal suffrage.”

Leung said the authorities would continue to tolerate the protests as long as participants did not charge police lines, but urged them to stop their occupation of much of the downtown area.

“I urge students not to charge into or occupy government buildings. … It’s not about my personal inconvenience,” he said. “These few days the protesters’ occupation of key areas of the city has already seriously affected Hong Kong’s economy, people’s daily lives and government functioning.”

Before Leung spoke, the heads of two major universities whose students joined in launching the protests appeared before a jittery crowd in front of the entrance to his office and appealed for calm.

Earlier Thursday, police were seen bringing in supplies of tear gas and other riot gear, and the protesters prepared face masks and goggles as tensions rose in the standoff outside the imposing government compound near the waterfront.

After Leung’s news conference, however, the atmosphere was palpably calmer, although many protesters expressed disappointment about the proposed talks.