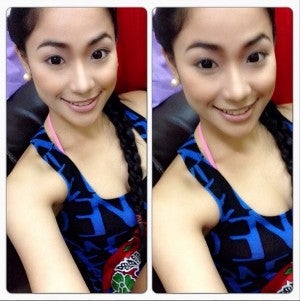 MANILA, Philippines—The police official embroiled in the calling card controversy sparked by a social media post of Alyzza ‎Agustin will seek an investigation on the incident as he vows to pursue charges against the men’s magazine model.

Chief Superintendent Alexander Ignacio, Philippine National Police Directorate for Plans chief, told INQUIRER.net in a text message that he would not let Agustin slide for causing damage to his reputation and his family.

“Hindi dapat palampasin ang ganyan. It has deeply affected my family and my reputation,” he said.

The FHM model posted on Facebook and Instagram over the weekend a photo of a business card, allegedly owned by a “Police Director Alexander Ignacio,” which helped her evade a traffic citation.

At the back of the card, a message purportedly from Ignacio said: “PLS ASSIST MY EA‎, ALYZZA AGUSTIN.”

But Ignacio, in an earlier statement, denied knowing the sexy model and disowned card, saying his rank was erroneously written on the supposedly fake document.

Agustin also said that she doesn’t personally know the police official and apologized to Ignacio and the PNP.

Despite this, Ignacio said he will consult to the PNP Legal service and the Criminal Investigation and Detection Group (CIDG) regarding the incident.

“I am consulting with our PNP Legal Service and the CIDG to determine the appropriate charges I can file and if a PNP lawyer can represent me,” he said.

Ignacio is currently in Kuala Lumpur, Malaysia for the 5th Aseanapol conference. He is expected to be back in the Philippines on Friday.

Read Next
Marines commander in Sulu relieved of post
EDITORS' PICK
153 protests filed vs China actions in PH waters in 2021 — DFA
Atienza tells Bongbong: You’re not a millennial to be ignorant of martial law atrocities
Delivering delight against all odds
Duterte blasts rights groups for overlooking the ‘other side’ of drug war
Leaked: A 60x Zoom and all-new Helio G96 mean a complete overhaul for TECNO Mobile’s new CAMON 18 series
Next level mobile photography within reach with vivo X70 co-engineered with ZEISS
MOST READ
Robredo to supporters: Be calm, gentle and do good deeds
Duterte inaugurates P684-M bypass road project in Quezon
Matibag calls Senate budget hearing ‘political,’ gets kicked out
Cristine Reyes opens up on her trauma from abuse, painful childhood
Don't miss out on the latest news and information.