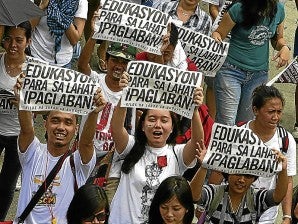 ‘HISTORIC SHOW OF RAGE’. UP students march to Don Chino Roces (formerly Mendiola) bridge in Manila to protest the budget cuts of state universities and colleges. Other Metro schools involved are Polytechnic University of the Philippines, Eulogio Amang Rodriguez Institute of Science and Technology and Philippine Normal University. MARIANNE BERMUDEZ

Students of state universities and colleges (SUCs) led by the University of the Philippines (UP) on Friday walked out of their classes and conducted protest actions in Luzon and the Visayas against cuts in subsidy.

“UP is a state university and cutting its allocation can be considered abandonment. That is why we are staging this strike,” said Mark Simbajon, spokesperson of the League of Filipino Students (LFS) in Tacloban City.

In Baguio City, about 600 students and teachers of UP Baguio blocked the noon traffic for 10 minutes by lying in the middle of Session Road.

The protesters, representing almost 40 percent of the UP Baguio population, were led by three college deans and professors.

At the Don Chino Roces (formerly Mendiola) Bridge in Manila, more than 1,000 students staged what they called “a historic show of rage.”

The students were from UP Diliman, Polytechnic University of the Philippines (PUP), Eulogio “Amang” Rodriguez Institute of Science and Technology, and Philippine Normal University.

They were joined by members of LFS, College Editors Guild of the Philippines; the party-list groups Anakpawis, Bayan Muna Alliance of Concerned Teachers and Gabriela; and the labor alliance Kilusang Mayo Uno.

“This day is the culmination of the weeklong … protest activities against the social services cutback. The P146-million cut on the budget for [SUCs] will lead to higher tuition rates and bloated miscellaneous fees, making education a privilege exclusive to those who can afford [it],” Vencer Crisostomo, spokesperson of Kilos na Laban sa Budget Cuts, said in a statement.

Crisostomo warned that the congressmen passed the budget “like a thief in the night” when everyone was asleep, and that the Senate was sure to do the same.

As the students held their protest actions, the Commission on Higher Education (CHEd) expressed support for calls to raise the budget for public tertiary education, saying the proposed 2012 allocation would serve only as a “survival budget.”

CHEd Executive Director Julito Vitriolo said SUCs would be unable to afford “ambitious projects” to raise their quality on the proposed P26.1-billion budget for some 110 schools.

“Because there is no dramatic increase in the subsidy, there is a standstill in quality… It is only enough for their subsistence,” Vitriolo told the Inquirer.

“The budget is just to maintain a certain level. It’s not even a development budget. It’s a survival budget. It’s not the kind of budget that could dramatically improve [the quality of education in SUCs],” he said.

The Department of Budget and Management (DBM) had said the proposed budget for SUCs was already higher by 10.1 percent from the current year’s P23.7 billion.

Budget Secretary Florencio Abad said the Aquino administration had raised the aggregate budget for SUCs from P23.7 billion in 2011 to P26.1 billion in 2012.

Abad said this amount included P23.6 billion, inclusive of automatic appropriations itemized per SUC, a standby fund of more than P2 billion under the Miscellaneous and Personnel Benefit Funds for unfilled positions in SUCs, and an additional P500 million under the CHEd for SUC development.

The P26.1-billion proposal is still facing deliberations in Congress.

Barely half the need

But Rep. Raymond Palatino of the party-list group Kabataan said the proposal was at P21.8 billion, or barely half of what SUCs actually required for effective operations in 2012.

The National Union of Students of the Philippines (NUSP) said roughly 50 SUCs would suffer cuts of up to P569.8 million under the 2012 budget, per its estimates.

For instance, NUSP said, Malacañang’s proposed P5.54-billion budget for UP in 2012, already higher than this year’s P1.39 billion, was still far from the estimated P18 billion that the UP system would need to properly run its campuses nationwide.

As for PUP, its proposed P737-million budget is less than half the P2 billion it would need to educate some 65,000 students across the country, NUSP said.

Estimating that SUCs should receive a total of P45.8 billion in 2012, Palatino filed this week a petition at the House of Representatives’ committee on appropriations seeking a P24-billion raise in the tertiary education budget.

Cuts in subsidy come amid increasing enrollment in public tertiary schools, a trend CHEd has observed in recent years as students move to state schools with the rising cost of tuition in private institutions.

“We support the call of members of Congress, the House of Representatives, lobbying for increase in the budget. But to get it, we’ll have to go through the bicameral committee,” CHEd’s Vitriolo said.

“The [budget] pie is limited to a certain size and more and more schools are sharing it… Enrollment is increasing but the size of the pie remains the same so the budget is diluted,” he said.

The London-based research and ratings firm Quacquarelli Symonds (QS) recently released its world university rankings, where no Philippine school made the top 300.

Only four schools—UP, Ateneo de Manila, De La Salle University and the University of Santo Tomas—barely made it to  the top 600 list. NO SUC save for UP made the list as QS noted the declining state spending on education.

“What’s a bit alarming is that, for instance, in the case of UP, they want to pursue projects to be able to compete in the world rankings [of top universities], but they cannot pursue ambitious projects with limited funds,” Vitriolo said.

He said the budget for SUCs was calculated based on the principle of “normative financing,” where spending priority was given to performing schools while cuts in the operating budget were made on underperforming schools.

He said plans were underway to rationalize the system of tertiary education, such as the “clustering and amalgamation” of SUCs in certain regions with a number of institutions offering the same courses.

He said schools in northern Luzon, the Cordillera Administrative Region and Northern Mindanao were already “warm to the idea” of amalgamation, which aims to more efficiently distribute and maximize limited state subsidy.

Prof. Celia Austria of UP Baguio’s College of Science said the deans were backing the protest action owing to a statement earlier made by UP president Alfredo Pascual that while the cuts in the proposed 2012 UP budget appeared deep on paper, what the DBM had removed from the allocation was three times higher.

Austria said UP Baguio was able to squeeze funds from savings when contractors were hired for unfilled positions. “Contractors are paid less, so what is saved from the salary allotted for their positions is realigned to pay for operational costs. But the DBM under Budget Secretary Abad does not even allow this practice,” she said.

At UP Los Baños in Laguna province, around 500 students, teachers and university employees joined the protest rally, according to Ma. Cristina Madeja, chair of the student group Sakbayan.

“Some teachers dismissed their classes so the students could join the protest,” Castillo said. “We in the academic union support the call for a higher state subsidy for education. [Budget cuts] may mean lower benefits for us but the students suffer more because these may mean higher tuition for them.”

The UPLB students held a program while around 100 of them joined the mass “planking” in front of the Oblation statue.

In the Visayas, over 1,000 students of UP Tacloban also marched on the city streets to protest the cuts in the SUC budget.

Around 600 students of UP Visayas, Western Visayas State University (WVSU), and Western Visayas Colleges of Science and Technology marched from their campuses and converged at the Iloilo Capitol grounds for a rally.

They were backed by school administrators and employees.

“We decry [President] Aquino’s shifting of the burden of subsidizing education from the government to the students and their families,” said Krisma Nina Porquia, officer of the WVSU Student Council.

“By gradually reducing the budget for SUCs, his government compels school administrations to implement austerity measures and tuition and other fee increases,” she said.

But Abad said in a statement: “Clearly, the state subsidy for SUCs is higher next year. But more important than the increase, this proposed budget supports the development of SUCs as responsive to the government’s five priority areas for growth and employment.”

He said these priority areas were agriculture and fisheries, tourism, general infrastructure, semiconductors and electronics, and business process outsourcing.

Abad said Mr. Aquino had directed CHEd “to work together” with SUCs, the Technical Education and Skills Development Authority and the labor department “to align their curricula to these priority areas.”

“There is an immense opportunity in these areas but they are lacking in qualified manpower,” he said.  With reports from Norman Bordadora and Jeannette I. Andrade in Manila; Vincent Cabreza with contributor Markfil Tersol, Inquirer Northern Luzon; Maricar Cinco, Inquirer Southern Luzon; and Nestor Burgos Jr., Joey Gabieta and Jhunnex Napallacan, Inquirer Visayas