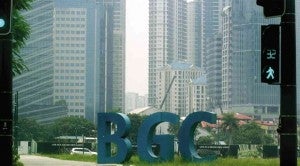 MANILA, Philippines—What was supposedly a simple enforcement of a ban on skateboarding at Bonifacio Global City resulted in punches being thrown and insults being hurled between BGC security guards and two Englishmen.

The Sept. 27 incident, which was captured on video that has since gone viral, led to the filing of complaints for malicious mischief and slight physical injuries against Samuel James Reynolds and Christopher Edwards. They posted bail on Tuesday.

The Taguig police filed the complaints in the city prosecutor’s office on behalf of BGC guards Nydes Buenafe and Imbran Ibno, who alleged that Reynolds and Edwards assaulted them when they tried to implement the ban and confiscate their skateboard.

According to the charge sheet signed by investigation unit head Chief Insp. Benito Basilio Jr., Buenafe tried to accost Reynolds and Edwards for skateboarding around 5:30 p.m. at the BGC’s Terra Park on 28th Street. When she told Reynolds that what they were doing was prohibited at the area, the man replied: “I don’t care, you (expletive)! Two policewomen told me that we can skateboard inside this park.”

“I don’t respect you! I only respect the police. They are the only ones authorized to give us (orders),” the charge sheet quoted him as saying.

This prompted Buenafe to call Ibno for help, and together they tried to confiscate Reynold’s skateboard. But the man resisted and, “with intent to harm, strongly pushed Buenafe” and caused injuries on her lips and scratches on her neck and left jaw.

When Ibno tried to pacify Reynolds, the Englishman allegedly hit him several times in the stomach and grabbed and damaged his vest and badge.

Edwards joined the fray and also hit Ibno in his stomach, the complaint said.

Reynolds and Edwards fled the scene but were intercepted on 5th Avenue by other security guards who had been alerted to the commotion. It was this arrest that was captured on video, which showed the two taking several punches from the complainants’ colleagues before they were finally subdued.

In a statement, Bonifacio Estate Services Corp. admitted that “certain members” of its security personnel “resorted to inappropriate behavior.”

“We are currently conducting a full investigation of this incident,” it said.