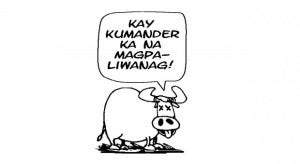 MANILA, Philippines–The model who was alleged to be an EA (executive assistant) of a police general when caught violating the color-coding scheme said sorry on Wednesday.

It’s not against the law to give a calling card; what’s wrong is using it to gain favors, the spokesman of the Philippine National Police said on Wednesday.

Senior Supt. Wilben Mayor said the PNP shouldn’t have been dragged into the controversy surrounding a car show model, Alyzza Agustin, allegedly using a police official’s card to get away with a traffic violation.

“I emphasize that it’s not the fault of the official,” Mayor told reporters, referring to Chief Supt. Alexander Ignacio, the PNP director for plans.

“The offender is the woman. She violated a traffic rule then bragged about getting away with it on social media. At the same time, she misrepresented that she’s acquainted with the official,” Ignacio added.

Agustin, who made the list of 100 sexiest women in the world in 2013 in FHM, a glossy Playboy-type magazine, had posted on her Facebook page:

“Nahuli na naman ako dahil coding but because of you Boss Alex wala ng huli huli. Thank you so much sa napaka-useful mong card with matching dedication pa #happykid (I was caught again because I violated the number coding scheme but because of you, Boss Alex, I was not apprehended. Thank you so much for this useful business card with matching dedication.)”

The post was accompanied with photos of Ignacio’s purported business card showing his name, designation and the PNP logo. Written on the back was a message which went: “Please assist my EA, Alyzza Agustin” followed by a signature.

Violation of the color-coding scheme—introduced to ease monster traffic jams in the metropolis—is penalized by a P300 fine.

The incident came at a bad time for the 150,000-strong PNP, which is grappling with a firestorm surrounding allegations of corruption and unexplained wealth against its chief, Director General Alan Purisima, and rising cases of criminality.

Agustin has issued an apology on her Facebook account, saying she didn’t personally know Ignacio. Agustin has since deactivated her page but Top Gear, a motoring magazine, was able to get a screenshot of her mea culpa before she shut it down.

“I would like to apologize to everyone who was affected and offended by my post: fellow motorists, Director Alexander C. Ignacio and his family, and the PNP institution as a whole. I was just overwhelmed by that moment because I was caught in traffic for hours coming from work. I would like to make it a point that I do not know Director Alexander C. Ignacio personally,” she said.

In a statement, Ignacio denied knowing Agustin and pointed out that the calling card used by the model contained wrong information.

Not a pass for violation

“I am a chief superintendent (one-star rank) and not a police director (two stars). Alyzza Agustin is not my executive assistant and there is no such position in my office,” said Ignacio, who is currently in Malaysia for the Aseanapol conference.

Mayor said it was up to Ignacio if he would pursue a complaint since it was a personal matter. The PNP spokesman added that there were three parties in the issue and called on traffic enforcers to impose the law.

“When a violator shows you a calling card, the more that you should issue a citation. A calling card is not a badge or pass to commit a violation,” Mayor said.

He said the controversy showed the danger of technology and how reputations could easily be damaged.

“The police are being blamed when this is a civilian’s fault. The official’s name was just used,” he said.