MANILA, Philippines–The country’s top policeman, who will be subjected to a lifestyle check like the rest of his men, last year bought for P1.5 million on government salary a sport utility vehicle (SUV) worth P4 million.

Purisima also told the Senate committee on public order Tuesday that he accepted an P11-million donation for the construction of his official residence called the “White House” in 2013, but the actual deed of donation was signed only on Sept. 3, 2014.

His statements raised suspicions among senators about the propriety of the PNP chief’s actions.

Sen. Grace Poe, chair of the committee on public order, also wondered about the valuation of Purisima’s 4.7-hectare property in Nueva Ecija province.

Poe said the PNP chief should observe the proper processes. But she could not say if the people’s doubts had to be doused.

“There is really a lot to be proven here. That those who made the donation have no personal interest in this, because you did not follow the proper process,” she said.

“It’s the inconsistencies in some of your answers that really gave way to the suspicions being felt by many,” she told Purisima.

Poe later told reporters that she did not think Purisima was telling the whole truth.

She said she found it hard to accept that Purisima would let certain things take place, especially things that defied common sense.

Purisima defended the P11-million donation from his friends in the construction industry, saying the donation was made to the PNP as an institution and not to him personally. 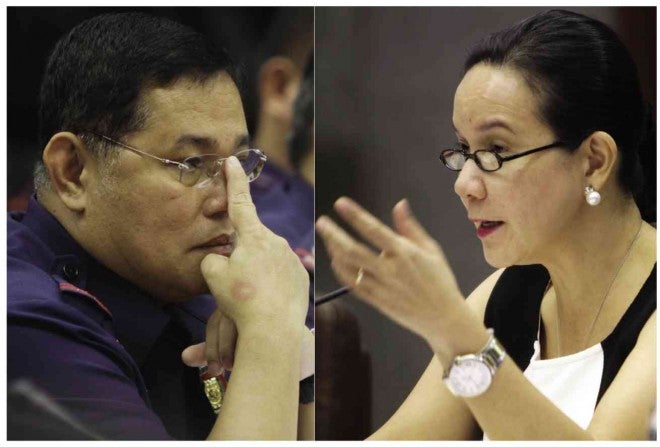 FALL FROM GRACE Sen. Grace Poe, chair of the Senate committee on public order, grills PNP Chief Alan Purisima about inconsistencies in his explanation to the media about his assets. EDWIN BACASMAS

His friends, who he said had no PNP contracts, offered to build the new quarters because the old one had been submerged in floodwaters.

Purisima also defended his 4.7-hectare Nueva Ecija property, saying he bought this in 1998 with his own money. The lot has a 204-square-meter house and has a fair market value of P3.75 million as seen in his statement of assets and liabilities (SALN).

Purisma, who has no plans of resigning from the PNP, attributed the attacks against him, including those against his poultry business and the house that he said he bought honestly, to his efforts to clean up the corruption at the PNP Firearms and Explosives Division, and to eradicate the syndicate controlling the issuance of gun licenses.

He said he would continue running after scalawags in uniform and would not turn his back on his duties.

“I will continue serving the country even if they continue to criticize me without basis,” he told the Senate.

He gave himself and his efforts as PNP chief a rating of 9 on a scale of 1 to 10.

But Poe, who said the PNP needed a leader with moral authority, was dissatisfied with Purisima’s explanations about the donated White House, noting that the actual deed of donation was signed only on Sept. 3.

But the construction of the house was started and completed in 2013. She said this was a “reverse process,” since the deed of donation should have come first.

The law against bribery prohibits any public officer from receiving gifts given to him by reason of his office, she noted.

Purisima said he asked his friends to execute the deed of donation because of the questions that had been raised about the construction of the house.

He said the donors had not wanted to be identified at first, but he convinced them to come out to legalize the donation.

As for the bribery question, he pointed out that he was not the personal recipient of the gift but the PNP.

He was just the incidental beneficiary being the incumbent PNP chief and would leave the quarters to his successor, Purisima said.

Poe acknowledged his point and said it was his “saving grace,” but she was not appeased.

“But the process by which you approved such a donation is what’s really questionable, which we should prevent from happening in the future …. We need to institutionalize donations. It’s still suspect, sir,” she said.

Sen. Sergio Osmeña III said the friends who donated the White House were probably after a favor.

“They’re not doing that out of the goodness of their hearts. As long as you’re in office, they know they can get something. Human nature being what it is and debt of gratitude being a strong cultural trait in our society, in our country, that’s what will happen,” Osmeña said.

Osmeña also said that while the PNP chief deserved to have decent quarters, Purisima could have asked his friends who offered to build his official residence to first improve the medical facilities for PNP personnel.

“Did you not say, thank you for your kindness. Would you like to spend your money first on improving the hospital? That did not cross your mind?” he asked.

But Purisima replied that his friends were focused on the PNP chief’s quarters because it was prone to being submerged in floods.

He also asked whether Purisima had seen the design of the White House before it was built.

The latter said he did not, prompting Osmeña to wonder whether the PNP chief would have accepted it if his friends turned out to have built a dog house.

The senator also asked whether Purisima’s example meant that other contractors could offer to build houses for other PNP officials, so long as the latter would turn these over to their successors.

Purisima said in such a case, it would be reduced to a deed of donation so that the PNP would be the one to benefit from it, not the individual.

Osmeña said there was a need to take a look at what Pope Francis did. The Pope has grand quarters reserved for him, but he chose to stay in a modest apartment with other priests and bishops.

“That is a leader. Maybe all those who would be tasked to be leaders in their own little way will show the example that their men come first,” he said.

As for the Nueva Ecija property, Poe noted that its valuation seemed to be low, noting that the value of the houses on the property were placed at over P1 million.

She said the house was only 204 square meters but there were other outhouses near the main house.

Poe advised Purisima to have the property’s value reassessed, given the rumors that have been going around about its value.

Poe also asked about the P1.5-million Toyota Land Cruiser that Purisima bought in 2013, saying many would likely be interested in a place that offered such a discounted price for an SUV.

Purisima said the dealer in San Fernando, Pampanga, had offered him a big discount on the Land Cruiser.

Poe also said Purisima should have wondered about the discount.

“I’m not saying it’s your fault that you were able to get it at a discounted price. But you should have taken a second look at that big a discount…. Ask yourself, why is this being given to me at a cheaper price?” she said.

Poe told reporters she would study if she would recommend the filing of charges against Purisima. Her committee is set to issue a report on its findings about the PNP.

The hearings she had conducted were intended to tackle the PNP modernization and the brazenness of criminal acts.

His assets amounted to P17.264 million. His real properties, aside from the Nueva Ecija property, also include three houses and lots in Caloocan City, a lot in Ilocos Sur province and a condominium unit in Cubao.

His personal properties include the Prado Land Cruiser, a Toyota Hi Lux, a Starex, a Toyota Innova, a Toyota Alphard, a backhoe, two loaders, bank deposits, books, furniture and appliances.

His liabilities, consisting of car and personal loans, amounted to P10.7 million.