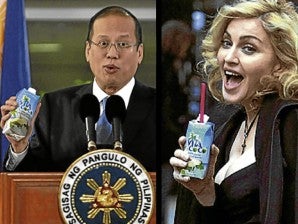 LOCO OVER COCO. President Aquino shows “buko” juice in a pack from the Philippines which is now a craze in the United States during his speech upon arrival from the US. At right, Madonna touts a coco drink from a company where she was reported to have invested $10 million. ARNOLD ALMACEN; PHOTO FROM LAX-MAGAZINE.COM

The idea might not be that far-fetched with the increasing demand for “coco water” in the US and Europe as an alternative to Gatorade, according to top government officials.

Gatorade is a brand of sports drink that is used to replenish the combination of water, carbohydrates and electrolytes that athletes lose during vigorous exercise and athletic competitions.

But first, President Benigno Aquino III and administration officials would like the new craze for buko juice to energize the Philippine countryside.

According to Mr. Aquino, two US companies want to make fresh investments in the country’s coconut industry to meet the international demand for coco water.

He said he was very excited over what this would do for the development of the country’s coconut-growing regions.

“Drinking what they call coco water, and what we call buko juice, is a growing trend in the US. Because of its nutrients, because it is natural and environment friendly, it is becoming the new natural sports drink in America and is now a hundred-million-dollar industry,” Mr. Aquino said on his arrival early Friday from a working visit to the US.

“Doesn’t it (buko juice) sometimes just go to waste? Who would have thought we could earn from it and use it to uplift the lives of many Filipinos in the provinces,” the President said.

Coconut water, the clear liquid found inside young coconuts, is being promoted as an alternative natural sports drink because it contains in their natural form the essential electrolytes and minerals needed for rehydration.

Trade Secretary Gregory Domingo said new investments in the coconut industry could generate tens of thousands of new jobs in the provinces.

He urged coconut farmers to plant new trees to make it sustainable for the Philippines to meet the growing international demand for coco water.

The two companies that have expressed interest in investing in the country’s coconut industry are Pepsi Co. and Vita Coco.

According to Mr. Aquino, Vita Coco officials told him during his US visit that they intend to invest $15 million in the next four years.

He said the market for coco water is increasing by 40 percent annually. But while it can still cope with present demand, the Philippines needs to plant new trees to make its participation in the business sustainable, Domingo said.

The trade secretary said most of the country’s coconut trees are already 80 to 100 years old and their yield are only 20 percent of what they used to be. New trees would yield more coconuts, he said.

In his remarks on his arrival at about 2:45 a.m. Friday, the President said the Philippines is again held in high esteem in the world stage following a year of administration efforts to curb corruption and of prudent spending.

According to Mr. Aquino, the Philippines is not just one of the members of US President Barrack Obama’s Open Government Partnership but is one of the leaders in promoting “an open, more honest and more trusted governance in the whole world.”

“We have seen the result of good governance. We are recognized by the whole world, not only by businessmen but also by governments,” Mr. Aquino said.

“Before we exported horror stories about our country’s situation, now we have numerous invitations to share our best practices here in the Philippines,” he added.

Obama and his cochair in the OGP, Brazilian President Dilma Rousseff, invited Mr. Aquino to the launch of the initiative for transparency and against corruption in government. The President was seated beside Obama during the event.

According to Ambassador to the US Jose Cuisia Jr., the Philippines was chosen to be one of the OGP leaders because of Mr. Aquino’s “commitment to good governance and his determination to fight corruption in order to create more jobs for Filipinos and eventually reduce poverty.”

Aside from the Philippines, the other members of the OGP steering committee are Indonesia, Mexico, Norway, South Africa, the United Kingdom, the US and Brazil.

“I am glad to be part of this extraordinary opportunity. We’re now not just a member but one of the leaders in promoting open, more honest and more trusted governance in the whole world. The Philippines is one of the members of the steering committee,” Mr. Aquino said on Friday.

Mr. Aquino also shared the Philippine experience in fighting corruption in speeches before an OGP-related forum, “The Power of Open Government: A Global Discussion,” where he was the only head of state to speak.

He also spoke on the same topic before the Asia Society and the World Bank.

The President said he and his delegation maximized the trip to the US as they had gone on to Washington, DC, from New York on the invitation of the World Bank and the International Monetary Fund to share “our good experience over the past year.”

He also met with the Filipino community in Washington, DC.

He and the Cabinet secretaries in his party also met with US lawmakers to “strengthen the relationship that will ensure we have some assistance in taking on the straight path toward progress.”

“We intensified our initiatives in promoting a clean and accountable administration to maintain an honest, effective and dependable government,” he said.

“And along with our diligent economic managers, we asked businessmen in America to put their capital in the Philippines,” he added.

Mr. Aquino said the international community has seen how his government has been putting to right the country’s systems and institutions.

“The result, trust and confidence, that is the reason that more businessmen and worthwhile projects come in,” he said.