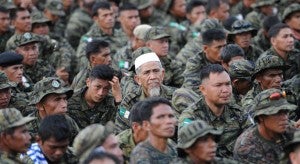 DAVAO CITY, Philippines—Aside from the weapons of more than 10,000 fighters, a huge challenge to the normalization process is the presence of tens of thousands of loose firearms in the areas covered by the new Bangsamoro entity.

“There were some who had firearms who lent them to their relatives who were fighting for us,” Jaafar said.

If these firearms are not surrendered, they may be used in criminal activities or sold to other armed groups, the source said.

“We do not want to go ahead of what the independent decommissioning body is planning. But we have already talked about our recommendations,” Jaafar said.

To attain normalization and productivity, a comprehensive needs assessment will be conducted for the rebels and their communities as the basis for the crafting of comprehensive socioeconomic development programs.

An Independent Decommissioning Body composed of Brunei, Norway and Turkey will provide the experts needed for the decommissioning body.

The body is tasked with conducting inventory, verification and validation of BIAF members, weapons and arms, and to develop and implement the schedule for decommissioning.

But for now, the most important thing to be settled, Jaafar said, is the immediate passage of the Bangsamoro Basic Law so the normalization process could proceed full steam.