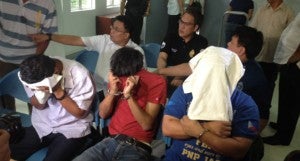 MANILA, Philippines — The Department of Justice (DOJ) has filed charges of illegal possession of incendiary devices against the three men caught by the National Bureau of Investigation operatives allegedly trying to plant a bomb at the Ninoy Aquino International Airport Terminal (Naia) 3 last month.

The case against Guerrero, San Pedro and Yohanon was raffled to the Pasay City regional trial court Branch 113.

“Respondents’ assertion that they were not aware that the Toyota Revo was loaded with incendiary devices cannot be given credence,” Reyes said in an 11-page resolution dated Sept. 14.

The prosecutor also found evidence of conspiracy between the suspects, adding that they were caught in flagrante delicto so they could not claim that the incendiary devices were planted.

The prosecutor also said the suspects failed to give evidence that the car belonged to someone who could have left the incendiary devices.

The suspects’ claim that the Toyota Revo did not contain any explosive since it managed to pass the rigid security and bomb-sniffing dogs of the airport should be threshed out in a full-blown trial, Reyes said.

In its complaint, the NBI-Anti-Organize and Transnational Crime Division said its agents, acting on an informant’s tip, followed the three suspects to the Naia-3 last Aug. 25. The suspects left the white Toyota Revo at the parking lot.

Agents who approached and inspected the car saw the incendiary devices composed of four plastic bottles containing gasoline to which were taped several “rebentador” or triangle-shaped firecrackers with fuses. They immediately arrested Yohanon and San Pedro when they returned to the vehicle.

Guerrero, who left the scene on a cab, was tailed to Makati City where he was arrested by NBI agents after he called Yohanon to pick him up.

Pamatong was arrested at the Naia Terminal 2 last Sept. 5 for pending court cases not related to the bombing attempt. He later posted bail.

Pamatong admitted knowing Guerrero, adding their group was opposed to China’s alleged territorial encroachment on and economic domination of the Philippines.

The NBI’s technical evaluation report said the incendiary devices could create a loud explosion accompanied by a huge fireball and would be strong enough to kill or injure people in the area that fragmented materials and burnt combustible materials could reach.

The prosecutor dismissed, for lack of evidence, allegations of the NBI that the suspects had plotted a series of bombings not only at the Naia but also at the Chinese Embassy, Mall of Asia and the DM Consunji Building.