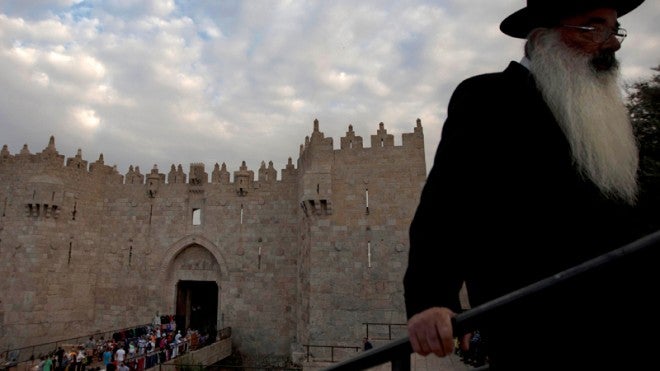 In this Monday, Nov. 5, 2012 file photo, an ultra-Orthodox Jewish man walks outside the Damascus gate in Jerusalem’s Old City. 2014 was supposed to be a record-breaking year for tourist visits to Israel. But all that changed when this summer’s 50-day war between Israel and Hamas prompted jittery travelers to cancel trips en masse. Merchants in Jerusalem’s Old City say the feel the sting. (AP Photo/Sebastian Scheiner, File)

JERUSALEM — It was supposed to be a record-breaking year for tourist visits to Israel. But all that changed when the 50-day war between Israel and Hamas prompted jittery travelers to cancel trips en masse, leaving empty hotel rooms and barren tourist sites in their wake.

The summertime fighting delivered a serious hit to Israel’s thriving tourism industry, causing losses of hundreds of millions of dollars and sparking concern that aftershocks may continue well after the war.

“Our challenge is how to prevent more cancelations. Despite a month having passed since the war, there is still an image among tourists that it is not safe to travel here,” said Oded Grofman of the Israel Incoming Tour Operators Association.

Israel’s war against Hamas came at the beginning of the peak tourist season, which includes July and August and runs through the Jewish High Holiday season and early winter.

Israel launched the war July 8 in response to rocket fire from the Gaza Strip and to destroy a network of tunnels used to attack Israelis. More than 2,100 Palestinians and 72 people on the Israeli side were killed. Israel and Hamas signed a cease-fire on Aug. 26.

None of the casualties on the Israeli side occurred in the country’s tourist hubs of Jerusalem and Tel Aviv, which endured rocket attacks but were largely protected by the Iron Dome missile defense system. Still, gruesome images of the war beamed around the world scared tourists away. One rocket that landed near Israel’s international airport spurred American and European airlines to suspend flights for 48 hours, sending a chill through the local tourism industry.

Before the war, the country hoped for a record-breaking year for tourist visitors. Since the second Palestinian uprising subsided nearly a decade ago, Israel has enjoyed a tourism boom, with as many as 3.6 million foreign visitors to the country last year. Tourism is now an estimated $5 billion industry and provides more than 110,000 jobs in Israel.

But the war caused a 31 percent drop in foreign visitors to Israel during that period compared to 2013, with the decline in August reaching 36 percent. The amount of visitors during that month was the lowest since February 2009, shortly after fighting between Israel and Palestinian militants. Israel’s Tourism Ministry estimates the losses to be upward of $544 million. A postwar influx of visitors for the Jewish holidays is expected to bring some relief, but not enough to salvage a miserable season.

Merchants in Jerusalem’s Old City, a top tourist destination, say they are still feeling the sting. The area’s cobblestone streets are typically filled with tourists purchasing chintzy wares and cheeky T-shirts and visiting the holy sites. But they’ve been eerily empty over the summer.

“When the Gaza war started it just went down,” said Kevork Kahvedjian, whose family has run a shop selling old photos in the Old City since 1949. “There were no people at all, none. It was as if there was a curfew or something.” Kahvedjian said his sales declined as much as 90 percent.

Beyond tourists, the war also drove away foreign acts, with many artists slated to perform this summer — among them Neil Young, the Backstreet Boys and Lana Del Rey — pulling out. Singer Lady Gaga did end up performing in front of a crowd of 20,000 people in Tel Aviv, however.

The slump in tourism comes amid a wider economic slowdown in Israel, which emerged intact from the 2008 global financial crisis though is now suffering from timid growth. The Bank of Israel has taken measures to stimulate the economy, dropping interest rate levels to 0.25 percent — the lowest ever — but some economists fear the country may be headed toward a recession. The Gaza war and its side effects may compound the sluggish growth.

Mirit Craven Schneider was among the droves of tourists who canceled trips to Israel because of the war. She was set to spend two weeks touring the country with her husband and three young children in what would have been their first trip to Israel.

“Once everything started happening, it was very concerning,” said Craven Schneider, a first grade teacher from Houston, Texas. “We didn’t want to be there with air raid sirens going off, and the kids having to spend time in bomb shelters.”

The industry is hoping to bounce back. Israel’s Tourism Ministry is set to launch new campaigns in markets in the U.S., Germany and Russia meant to target niche travelers, including Jewish and Christian communities. This year is largely unsalvageable, but officials hope that the numbers will rise again.

“People abroad might feel that things here are unsafe but this is a very, very safe country,” Tourism Minister Uzi Landau said. “This is exactly the kind of perception that we would like to share with all of our potential visitors.”

Read Next
Cuba begins to unite private enterprise, tourism
EDITORS' PICK
Being a celebrity isn’t wholly an ‘advantage’ in the election, says Sotto
Acer starts the year off strong with the Aspire Vero National Geographic Edition
Octogenarian jailed for ‘stealing mangoes’ freed after people chip in for bail
Gov’t eyeing COVID-19 tests in pharmacies
Gear up and get ready to play with Yamaha Mio Gear
Over 3 Million worth of prizes to be won at Smart Padala’s SENDali Manalo Promo!
MOST READ
Imelda Marcos trends on Twitter after octogenarian jailed for allegedly stealing mangoes
Natural immunity more potent than vaccines during US Delta wave—study
Help pours in for octogenarian jailed for ‘stealing’ mangoes in Pangasinan
Bongbong Marcos-Sara Duterte tandem adds Zubiri, Gadon, Marcoleta to Senate slate
Don't miss out on the latest news and information.