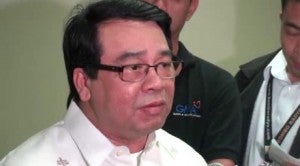 MANILA, Philippines–Bayan Muna is opposing a plan of the Department of Budget and Management (DBM) to insert provisions in the 2015 national budget approved last week by the House of Representatives that would allow Malacañang to declare any item savings and use these as pork barrel funds for its political allies.

“The DBM has admitted that there are errata in the budget we passed. We’re going to demand that the moment they insert the errata, [the budget] must be subjected to deliberations again. We didn’t see these errata, so we approved the wrong budget. It’s as good as if the second reading did not take place.” said Bayan Muna Rep. Neri Colmenares.

The errata refer to mistakes in figures that the DBM wants to change, he said.

On Friday, the House approved on second reading the proposed 2015 General Appropriation Act (GAA) with the third reading or final approval a mere formality. But Colmenares claimed that the DBM wanted to insert a “redefinition” or “reprioritization” of savings in a number of budget items.

“These terms are pork (barrel funds). For example, a P1.5-billion budget for a bridge. The DBM will then say it is reprioritizing and these (funds) wouldn’t be for a bridge but for another (project),” the senior deputy minority leader said. “That is the only definition of pork. It is a public fund in which only one person decides the project and the beneficiary.”

“It is unclear whether the DBM has officially admitted that they have inserted errata in the budget. The moment they admit that they inserted something, that makes it invalid,” he said.

But Speaker Feliciano Belmonte Jr. brushed off Colmenares’ threat to move for the nullification of the budget’s approval.

“We expected the budget to be approved as scheduled in the House,” Belmonte said in a text message. “I believe he (Colmenares) is just questioning the definition of savings. About the errata, I don’t know about that.”

Abad said what Congress would do concerning the budget was already out of the hands of Malacañang.

“The House has approved the budget on second reading. If Representative Colmenares wants that approval reconsidered he should address himself to the House. It is beyond the executive,” Abad said in a text message.

During the Sept. 9 deliberations, Bayan Muna Rep. Carlos Isagani Zarate pointed to a special provision in the proposed 2015 GAA that would allow the Armed Forces chief of staff to use the military’s P26.2-billion budget for personnel services and maintenance and other operating expenses (MOOE) into a personal pork barrel fund.

Special Provision No. 8 of the AFP and Department of National Defense’s budget says “the Chief of Staff of the AFP is authorized to reprioritize any item of expenditure within Personnel Services and MOOE of the Major Services and the General Headquarters of the AFP provided that any reprioritization of any item of expenditure [that] requires any change in allotment class and objects of expenditures within Capital Outlays shall be subject to prior approval of the President of the Philippines, upon recommendation by the Secretary of Budget and Management.”

Colmenares said Bayan Muna would consider challenging the issue in court if the House leaders and DBM refused to bring the budget back to plenary debates.

“We have filed lots of cases with the SC (Supreme Court). We’re getting all filed up and we only have a few lawyers,” Colmenares said.

The insertion would affect between P500 billion (Bayan Muna’s estimates) and P958 billion (Ibon Foundation’s estimate) of lump-sum funds in the P2.606-trillion 2015 budget.

Colmenares noted that a significant chunk of the lump-sum funds were channeled to local governments in what he believed was a campaign strategy for the 2016 elections.

Colmenares said his group’s intention was not to delay the passage of the budget.

“We do not want a reenacted budget because that will be a bigger pork barrel. We can have it tackled in plenary if they feel that it will take too long if it will be returned to the committee level,” Colmenares said. “But whether it is at the committee or plenary level, what is important is that it will be debated on again.”

He asked the DBM why it even bothered to ask Congress to approve the budget when it would only declare budget allocations savings and use these the way Malacañang pleased.

He said lump-sum funds should be limited to relief and rescue operations during calamities and minimal percentage as contingency and intelligence funds.

However, Colmenares acknowledged that it was “impossible” to have the lump-sum funds itemized because the administration controlled the majority in Congress.

He said the public’s only recourse was for the approval of a people’s initiative law banning lump-sum funds or for the Supreme Court to strike down these allocations as illegal.