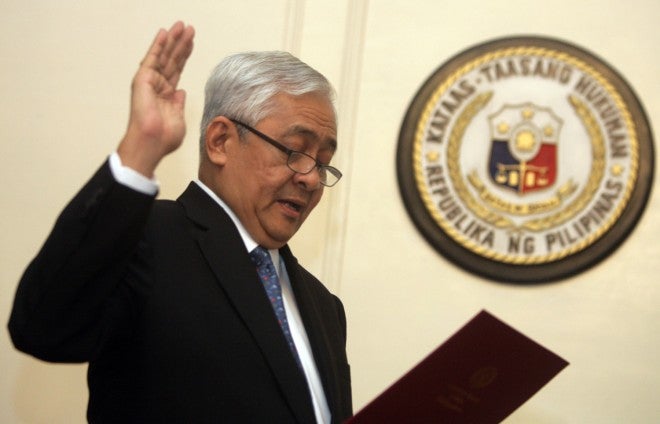 MANILA, Philippines–New Supreme Court Justice Francis Jardeleza’s inclusion in the Judicial and Bar Council (JBC) short list of nominees that resulted in his appointment as the newest member of the high tribunal was moot and could not be undone.

Legal experts gave this opinion on Thursday when asked about the appeal the JBC filed this week questioning “certain doctrines and findings” that the Supreme Court had raised when it ruled in favor of Jardeleza—specifically his inclusion in the short list from which President Aquino would pick the associate justice to replace the retiring Justice Roberto Abad.

Although his name was not on the list, the Supreme Court on Aug. 18 voted 7-4 to include Jardeleza’s name in the short list. The following day, he was named to the bench by President Aquino.

The JBC said it “does not seek to reverse,” and in fact respected Jardeleza’s appointment, but it filed the appeal to question the high court ruling that the JBC had committed a grave abuse of discretion when it excluded Jardeleza from the original short list of nominees to the Supreme Court.

The JBC had insisted the original list was “immutable.”

Its appeal, the JBC added, was a bid to protect its constitutional mandate to “ensure that nominees to the third branch of government all personify unquestionable integrity and loyalty to the public.”

While reiterating that it was not seeking a reversal of Jardeleza’s appointment, the JBC petition questioned “the alteration of the short list submitted by the JBC to the President,” after the high court had ordered Jardeleza’s inclusion.

The former Solicitor General, on his first month on the bench, told the Inquirer he would respond to the appeal in the Supreme Court but could not comment on the matter.

Jardeleza had impleaded the JBC, an independent body chaired by Chief Justice Maria Lourdes Sereno, and the executive branch of government for omitting his name from the short list of nominees to the Supreme Court from which Aquino was to pick the 15th and last magistrate.

Jardeleza won his petition in the Supreme Court with a 7-4 vote, with the high tribunal effectively rejecting the questions on his integrity that Sereno and Justice Antonio Carpio had raised over Jardeleza’s handling of the Philippine arbitration case against China in the United Nations.

It was the integrity question that reportedly initially cost Jardeleza an original nomination.

When Jardeleza was sworn in as an associate justice on Aug. 20, Sereno administered the oath to him.