MANILA, Philippines–Those were the years of writing dangerously.

In the eyes of the oppressive Marcos regime, the defiant journalists were better dead than read, better writhing than writing.

Whenever our group of women writers is asked to speak about our harrowing experiences during the martial law years, we never forget to say: “The men were in jail or dead, so we were (wo)’manning’ the fort.”

But we did not like being described as “women with balls.”

We had our share of frightening interrogations. I and many others were interrogated more than once for antimartial law and human rights pieces that we had written. I, and again many others, came close to being seized in the dead of night by armed men, had it not been for quick-thinking church people who came to our rescue.

But more important than ourselves and our foray into dangerous terrain were the stories that we wrote and managed to get published, thanks to the editors who paid dearly for their daring.

What were these stories, what were they about, who wrote them? Fortunately, they have been preserved between covers for many generations to come. 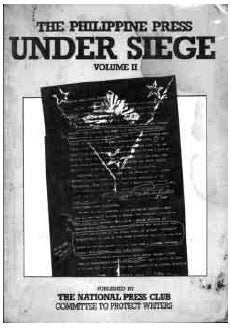 THIS is the cover of the book “The Philippine Press Under Siege” carrying articles by journalists arrested or threatened during the
rule of dictator Ferdinand Marcos.

In 1984 and 1985, our group, the Women Writers in Media Now (Women), came out with “The Philippine Press Under Siege,” Volumes 1 and 2, containing the “dangerous writing” that had provoked the dictatorship and brought on the horrible aftermath of such dangerous pursuits.

The collection was published by the Women’s Committee to Protect Writers and the National Press Club under the bold leadership of the late Tony Nieva.

These two volumes which we had worked on under the cover of darkness and under so much stress are now out of print. But the good news is that the National Historical Commission and the University of the Philippines Press recently agreed to resurrect them, so to speak, in a much better format, if not a better design. I am the editor of these resurrected editions.

Under shadow of death

The editors’ (“the group” with no name) note introducing Volume 1 reads:

“Together, (these stories) show the kind of ‘dangerous writing’ that has brought about the forced resignation, firing, blacklisting, arrest or detention of journalists, the padlocking or sequestering of a newspaper’s printing plant and equipment, and the filing of multimillion-peso libel suits or subversive charges against writers, editors and publishers.

“What constitutes ‘dangerous writing’ these days? Perhaps this volume can shed some light on this question. Two articles… deal with the President. Six reports are on the growing militarization in the countryside. Two are about election fraud and two on the aftermath of the Aquino assassination.”

Nieva wrote of Volume 2: “‘Better dead than read’ may well have been the title of this book for its graphic documentation of the blood-and-sand state of a profession under siege, underlying the personal struggles and heartbreaks of the men and women of the Philippine press who now work under the shadow of death itself.”

The Volume 2 editor Leonor Aureus-Briscoe wrote: “It is said that the past is prologue. And so we go back in time to trace the beginnings of the pattern of harassment and intimidation of journalists which has progressively worsened from military interrogations in 1980 to the growing deaths of journalists at present.

“We go back to Kalinga chief Macli-ing Dulag whose treacherous murder suggests parallels with the Aquino assassination in the way it raises questions for the press to its function in abnormal times like now. The parallels are uncanny: the murder of a charismatic opposition leader; the strong suspicion that the military was behind the killing; the people’s outrage and cry for justice; and the government clampdown on the press from giving the story full and truthful coverage.

“From the smaller to the larger picture, the press finds itself caught in the maelstrom between the public’s right to be informed and the government’s ‘national security’ interests. Philippine Press Under Siege, take two, stands witness to the WORD.”

Going for the jugular

“The Philippine Press Under Siege” Volumes 1 and 2 contain more than 60 articles. A majority of these stories resulted in the intimidation of their writers and editors. Several are in defense of journalism under siege. The books had great caricatures and photographs.

“There goes the New Society, welcome the New Republic” by Letty Jimenez-Magsanoc, the then editor of Philippine Panorama magazine (now editor in chief of the Philippine Daily Inquirer) was a spear that went straight for the dictator’s jugular. The day after the article came out on July 12, 1981, three high-ranking government officials threatened libel and subversion charges.

There is Bonifacio Gillego’s article on Marcos’ fake war medals that came out in “We Forum” in November 1982.

Jo-Ann Q. Maglipon’s heartrending story about the plight of the Aeta whose villages came under military siege got the ire of the military. She was subjected to a three-hour interrogation.

Three feature stories that I wrote—on the murder of Macli-ing Dulag, the death of Fr. Zacarias Agatep and the militarization in Bataan province—were the subject of the two interrogations that I underwent. The Bataan story so angered the powers-that-be that they made good their threat to sue. I was slapped with a P10-million libel suit. I had a battery of pro bono human rights lawyers, Lorenzo Tañada, Rene Saguisag, Fulgencio Factoran, Arno Sanidad and Joker Arroyo, among them.

In the second volume is Aureus’ extensive account (published in Mr.&Ms., Aug. 25, 1981) of the forced resignation of Magsanoc. Aureus pulled out her article from another magazine after she learned that the Minister of Information was given a copy to read which resulted in the cutting out of the important parts.

Also included are the banned articles that did not see the light of day, and transcripts (reconstituted from memory) of military interrogations, among them by Eugenia D. Apostol, the publisher of Mr.&Ms. magazine who later founded the Philippine Daily Inquirer, and my own stories.

“The book (the first volume) is a P254-million compilation, in a manner of speaking, of libel suits already filed against journalists,” Nieva wrote in the foreword. “It is also a celebration of the courage of women and men of the Fourth Estate who write on despite the new perils that threaten the Philippine press, despite threats of libel and incarceration under security statutes.”

Literary giant Nick Joaquin, in a speech before the Philippine PEN Conference in 1983 (“Writers in a Climate of Fear”) said that writers—journalists and literary ones—were all in this together.

“The proposition that literature is automatically free, because written in the light of eternity, while journalism is necessarily enslaved to the concerns of the moment—that proposition is false. And even if not false, still indefensible. No more than other republics can the Republic of Letters exist half-slave and half-free. While his brothers in journalism are in thrall, the creative writer is himself not whole, not safe and not free,” said the novelist and playwright who also wrote the most memorable journalism.

And so, sometime in 2015, we hope to deliver the new, resurrected compilation about Filipino journalists under siege during the reign of terror. We promise a page-turner, a riveting, cinematic, tear-jerking, blood-curdling, historical, true-to-life whodunit.