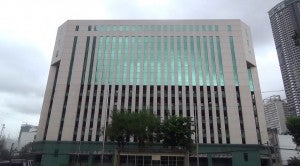 The Senate is having some difficulty serving a subpoena to a Gerry Limlingan, alleged to be a finance officer of Vice President Jejomar Binay. The subpoena was sent to the Makati City Hall (pictured), but personnel there did not accept it, according to a blue ribbon subcommittee staff member. INQUIRER.net FILE PHOTO

MANILA, Philippines–The Senate is having some difficulty serving a subpoena to a Gerry Limlingan, alleged to be a finance officer of Vice President Jejomar Binay, directing Limlingan to attend the Sept. 25 hearing of the blue ribbon subcommittee that is investigating the alleged overprice of the Makati Parking Building or City Hall II.

The subpoena for Limlingan was sent to the Makati City Hall, but personnel there did not accept it, according to a subcommittee staff member.

The subcommittee is preparing another subpoena for Limlingan to be sent to another Makati address.

Pimentel said he has also asked the Bureau of Immigration to check if Limlingan had left the country.

According to the testimony of former Makati Vice Mayor Ernesto Mercado, Limlingan was one of three persons to whom he had delivered bags of cash that were meant for Binay. Mercado said the cash that Limlingan received was intended for Binay’s 2010 campaign.

He said the cash came from the 13 percent kickbacks that Binay allegedly got from the city’s infrastructure projects.

Mercado alleged that the other recipients of the bags of cash were Makati Mayor Jejomar Erwin Binay when he was still councilor and a certain Ebeng Baloloy, whom he identified as the longtime personal secretary of the vice president.

Mayor Binay and Baloloy have also been subpoenaed. The subpoena for Baloloy was accepted by the Makati City Hall, said a member of the Senate staff.

Pimentel said that since Mayor Binay had been subpoenaed, he expects him to attend the hearing.

Should the mayor not show up, Pimentel said he would wait if any of the members of the committee would move to have him arrested.

Vice President Binay has also been invited to attend the Sept. 25 hearing, but as of Tuesday afternoon, he had not sent word to the Senate if he would heed the invitation or not.