(Editor’s Note 2: Twenty-nine mostly women journalists asked the Supreme Court [Arlene Babst et al.’s petition] to stop the National Intelligence Board [NIB] from interrogating journalists. By then, already eight women journalists had been subjected to individual interrogations between 1982 and 1983. Here’s an excerpt of the account of Eugenia Duran-Apostol, then publisher-editor of Mr & Ms Magazine, as culled from her affidavit.) 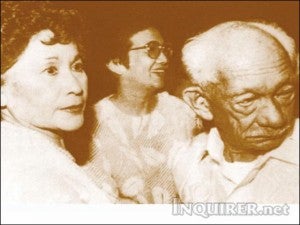 Some questions and answers culled from memory, since we did not take notes:

National Intelligence Board: What is your concept of national security?

Eugenia Duran-Apostol: The state of a country’s health, which should be strong enough to withstand aggression from within and from without.

NIB: How do you choose your writers?

EDA: We have a stable of the most worthy.

NIB: How come they are all oppositionist?

EDA: They’re the best to be had. We’ve invited those from the establishment, like Adrian Cristobal and he has honored us only once.

NIB: Are you aware that you may unwittingly be used by the communists in their propaganda?

EDA: Really? Thank you for telling us.

NIB: Did you know that letters to the editors about Bobby de la Paz [murdered activist doctor–Ed.] were orchestrated, even from the States?

EDA: Really? Thank you for the information.

NIB: Are you members of the Publishers Association of the Philippines? And have you read this code of ethics?

EDA: Thank you for the copy. (Mr & Ms here publishes the code for the reader to read and rate Mr & Ms and other Manila publications.) We believe we have observed this code as best we could.

NIB: How come you switched from being an entertainment magazine to one with political articles?

EDA: When President Marcos lifted martial law and declared the restoration of press freedom in January 1981, we took him very seriously. We opened our pages to critical articles because we believed there was a need for them, that they would be healthy for the country. To suppress the expression of differing but legitimate opinion would be like covering the kettle and not allowing the steam to escape … then you could have an explosive situation.

NIB: You mean you are crusading for something?

EDA: No, we are not. Mr & Ms is a commercial product which we hope is worth more than the three pesos our readers shell out every week for it. We give them a balanced menu of entertainment, news, fashion tips, food, medical and family advice. At the same time we realize that the community is hungry for political items which they may not ordinarily read in other publications and we try to be of real service on that score.

A rise in our circulation is proof that such a need is being filled.

When an injustice is done, we feel we have to call attention to it, but this does not mean we are against the government. We are for peaceful reform; we are opposed to violence in all forms, from all sides.

We need to earn the respect of our readers, to give them as much information as we can so they can form their own opinions.

NIB: Do you know that you are being read by the National Democratic Front?

NIB: Do you agree with everything your writers say?

EDA: Not always, but we defend their right to say it.

NIB: Do you edit S.P. Lopez? [eminent scholar, diplomat and former UP president–Ed.]

EDA: Who, me? He knows much more than we do. We would not dream of changing a single word.

NIB: But look at this line in his column: “Everything is falling apart in our country: the school system, the electoral system, the highways system.”

EDA: He knows what he is talking about. He was president of UP, he knows what ails the school system; as for the highways, it is obvious…

NIB: And you, what about you? Do you believe this yourself?

NIB: It is not good to discredit the government because without government, there can also be no free pass. For example, here is this quotation in your magazine, from Suzanne Pleshette [the American actress–Ed.]: “An elephant is a mouse built to government specifications.” What government is she referring to?

EDA: The US, that’s the government she knows.

NIB: You see, you have to beware of hidden messages that may be helping the enemy…