‘Voltes V’ fan gets back at Marcos 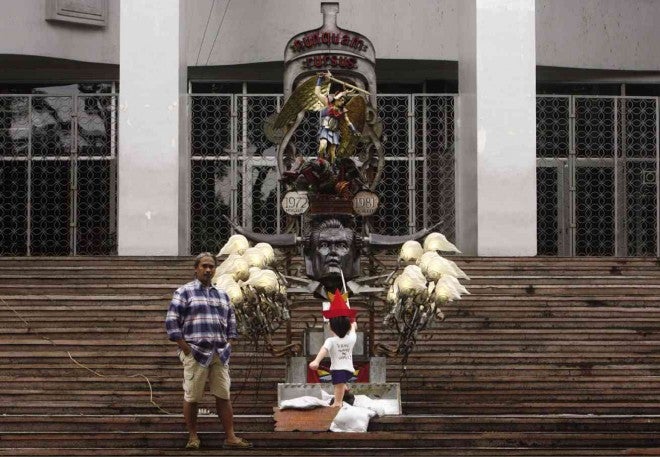 ‘ULTRAMAGNETIC’ ART Toym Leon Imao with his “Voltes V”-inspired piece conveying his “angst” over the Marcos dictatorship, on display at the UP Diliman campus. RAFFY LERMA

MANILA, Philippines—As an 11-year-old in 1979, Toym Leon Imao felt the heavy hand of the Marcos dictatorship when his favorite TV cartoon series “Voltes V” was unceremoniously taken off the air.

The hugely popular Japanese series, about a super robot and its five pilots defending Earth from Boazanian beast fighters, was banned during the presidency of Ferdinand Marcos for its supposedly rebellious messages. The plug was pulled when the series was down to its last four episodes—in which the Voltes team finally overthrows the tyrannical emperor from Planet Boazan.

Now 45 and an acclaimed sculptor and painter, Imao has channeled his childhood “angst” over the loss of his Friday night treat to come up with a 13-foot-tall installation titled “Last, Lost, Lust for Four Episodes.”

The piece is currently on exhibit at Palma Hall of the University of the Philippines in Diliman, Quezon City, in line with campus activities commemorating Marcos’ declaration of martial law on Sept. 21, 1972.

“I felt so bad when ‘Voltes V’ was banned. For the first time, the reality of martial law was felt by children my age. As a child, I knew what it was but I had a vague idea about it. But when he banned ‘Voltes V,’ Marcos became the villain in our lives,” Imao said in an Inquirer interview on Tuesday.

This would explain why, at the center of Imao’s complex work, a bust of the late strongman sports two long horns to resemble the Boazanian flagship “Sky Rook.” The horns are tipped with the muzzle of M-16 rifles as symbols of militarization.

Above the bust, Imao pays homage to Fernando Amorsolo’s “Marca Demonyo” logo that the National Artist made for a popular brand of gin, showing the Archangel Michael slaying the Devil. In Imao’s version, however, Michael is wearing Voltes V’s armor and wielding the robot’s famous “Laser Sword,” while the Devil is incarnated as a riot policeman.

On the day it was set up at UP, the installation included an image of a boy in a Voltes V helmet, which Imao said was a reference to the slain anti-Marcos student leader Lean Alejandro.

On Tuesday, Imao added a little girl carrying a toy gun. “I will add three more child figures to represent the whole Voltes team. The complete (cast) will be here by Sunday.”

“We will add something every day, until the 28th,” Imao said. “I want people (who see this) to recall their own experiences under martial law.”