Nick Joaquin: ‘Those who displayed an enjoyable recklessness’ | Inquirer News

Let me show you fear in a handful of dust—or rather of press releases.

Another look and the editors shuddered. They had read the list of speakers at this conference: names like professor Gonzales and Senator Diokno and Letty Magsanoc.

Needless to say, it was hard work distributing those press releases. They had generated fear in the offices of the principal newspapers of this country. 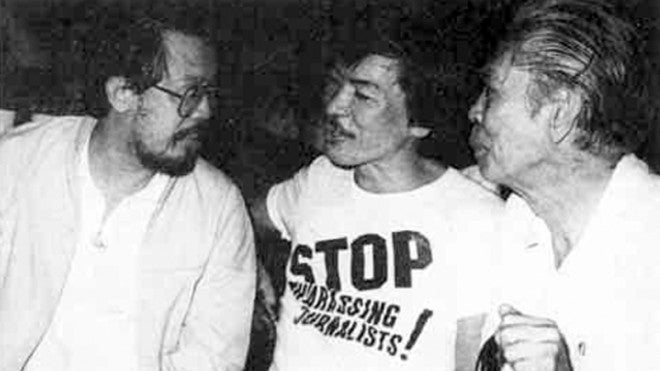 BEFORE THE ESCAPE This 1984 photo shows “We Forum” editor Jose Burgos (left) talking with detained journalist SaturOcampo (middle) and the lateWe Forum columnist Armando Malay. Ocampo was then on a one-day furlough to celebrate Press Freedom Day at the National Press Club. In May 1985, he was again allowed to return to the NPC where he escaped from his military captors. This picture was taken from the book “The Philippine Press Under Siege.” 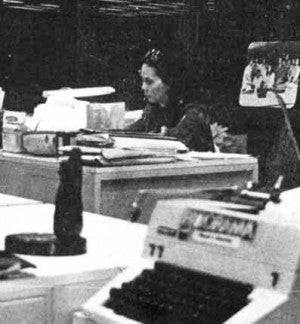 BYGONE DAYS Above is the last photo taken of Leticia Jimenez-Magsanoc as editor of Panorama magazine. Magsanoc is now editor in chief of the Philippine Daily Inquirer. PHOTO FROM “THE PHILIPPINE PRESS UNDER SIEGE”

But why should such a fear be strongest and most prevalent among those who are, so to put it, on the side of the angels? Those on the opposite side, you would think, have more reasons to be afraid.

But it’s the oppositionists who display a most enjoyable recklessness. Ah, but even if they do not share that fear, they too must live in the climate of fear created by those who have to be oh so careful about what they write and what they publish.

Nervous is the word

This is the climate being created today by the press in the Philippines—not the press of the opposition but the conformist press. The conforming press is so powerful it should be fearless—and yet it doesn’t even sound comfortable.

And this general nervousness communicates itself to you when you try to visit any of the big newspaper offices: It’s like trying to break into an armed camp.

Now the so-called creative writer may ask what had he got to do with the conditions under which the newspaper writer must perform. 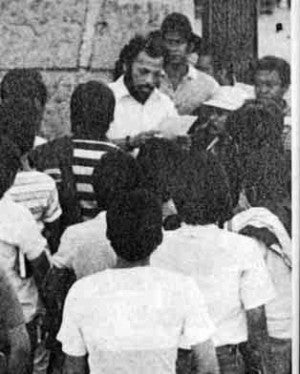 STRIKING JOURNALISTS The late journalist Tony Nieva (bearded) is shown in the photo while leading striking workers of the Bulletin Employees Union. The photo appeared in the book “The Philippine Press Under Siege.”

But if it’s the press that creates the cultural climate today, and that climate is one of fear, then even the creative writer, however independent he may think himself to be, is actually also suffering from the conditions that make the newspaper writer so nervous.

Neither safe nor free

The proposition that literature is automatically free, because written in the light of eternity, while journalism is necessarily enslaved to the concerns of the moment—that proposition is false. And even if not false, still indefensible.

No more than other republics can the Republic of Letters exist half-slave and half-free. While his brothers in journalism are in thrall, the creative writer is himself not whole, not safe and not free.

(Editor’s Note: National Artist Nick Joaquin delivered this speech at the Philippine PEN Conference on “The Writer in a Climate of Fear,” July 2, 1983, at the National Press Club Bulwagang Plaridel.)