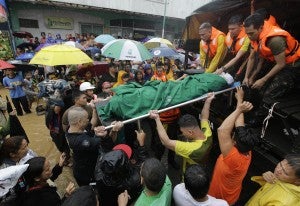 Rescuers unload the body of a man who died of natural causes at the height of heavy flooding brought about by tropical storm Fung-Wong flooded Marikina city, east of Manila, Philippines and most parts of the metropolis Friday, Sept. 19, 2014. AP

In its 6 a.m. report, the NDRRMC said seven of the casualties drowned while two were electrocuted. Meanwhile, 69-year old Erlinda Centrino from Rizal died after suffering from a head injury.

The two 22-year old men who were electrocuted along Espana Boulevard in Sampaloc Manila were identified as Siegried Nathan Arcilla and Glendon Sol Benedicto.

Earlier reports said Arcilla was a medical student at the University of Sto. Tomas while Benedicto was a hotel employee.

Seven others were reported injured.

On the other hand, 90 houses were destroyed while 509 were partially damaged.

Damage to agriculture was estimated at P48.5 million. Also damaged wereP91.34 million worth of roads, P1.85 million worth of farm to market roads and P2.4 million-worth small water impounding facility.