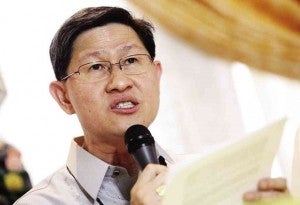 Friday’s storm forced the cancelation of an outdoor Church activity on climate change, but it apparently proved the very point being raised by Manila Archbishop Luis Antonio Tagle.

“It’s not enough that we complain about the changes happening in our environment—changes that, in the first place, we ourselves are responsible for. We must also take responsibility in order to mitigate the effects of these changes,” Tagle said in a homily during a Mass at the Manila Cathedral in Intramuros.

“Is it coincidental or providential that as we celebrate Mass and pray to the Lord in praise of His creation, as we deepen our sense of Christian and human responsibility for the proper care of creation, nature is making us experience the effects of changes in the environment?,” Tagle said, referring to the heavy rains that were paralyzing the metropolis as he spoke.

The service nevertheless saw the launch of “Walk for Climate,” a campaign in which Tagle and other prelates were supposed to go to various churches on foot, starting at the cathedral in Manila and ending at Baclaran Church in Parañaque City.

The Catholic leaders were set to join environmental advocates in the march, including Philippine Climate Change Commissioner Naderev “Yeb” Saño.

The campaign calls on the government to take urgent steps to reduce climate risk by stopping the use of coal plants for energy generation, and by stopping aggressive and destructive developments such as reclamation, agricultural land conversion and mining.

But then came Tropical Storm “Mario” and the monsoon rains enhanced by its passing on Friday over much of Luzon, keeping the “Walk” participants indoors.

“Caring for the environment should not be treated as an extracurricular activity. It’s part of our Christian responsibility,” said Tagle in his sermon. “We have no intention of stopping development, but development projects should be those that do not lead to destruction of the environment. We should show respect for God’s creations.”