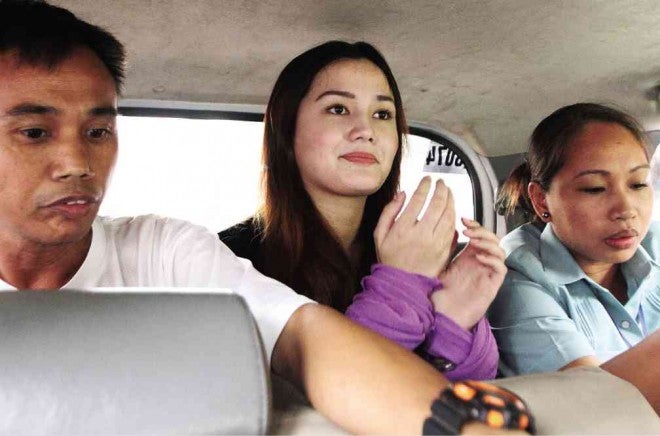 FLANKED by her police escorts and with a scarf covering her handcuffs, a visibly relieved Deniece Cornejo is driven to a Taguig City court from her detention cell in Camp Crame, Quezon City, on Thursday as part of the release procedures after she posted bail. LYN RILLON

Saying she had been praying “for this [moment] every night,” Deniece Cornejo walked out of her cell in Camp Crame on Thursday after spending more than four months behind bars on a charge of serious illegal detention.

“I would like to thank my supporters and those who prayed for me. I have been praying for this every night. I have been waiting for this,” Cornejo told reporters before she left the Criminal Investigation and Detection Group (CIDG) headquarters around 4 p.m.

Her release capped a three-day wait after Taguig Judge Paz Esperanza Cortes on Monday allowed her and her coaccused— businessman Cedric Lee and Simeon Palma Raz Jr.—to post bail in connection with the case filed against them by actor-TV host Ferdinand “Vhong” Navarro.

Lee and Raz were freed on bail the following day but it was not until yesterday that Cornejo’s camp managed to comply with all the requirements set by the court for her release.

Her lawyer, Ferdinand Topacio, told reporters that Navarro had nothing to fear from their camp.

“What will Deniece do to him? He has nothing to fear. My client is very sweet. What can she do to him?” he said.

Topacio added that Cornejo intended to make up for lost time with her family and friends after spending the last four months in detention.

Before she was finally released, Cornejo left her detention cell around 1 p.m. to appear in the Taguig City court, one of the requirements for her to be able to post bail.

“She is required by the Taguig City court to report [to the judge]. I think she will subscribe to an affidavit of undertaking,” Topacio told reporters earlier in the day.

After appearing in court, Cornejo went back to Camp Crame where she underwent a medical examination at the CIDG before her release.

She then left for the Commission on Human Rights (CHR) where she had filed a complaint in connection with the dismissal of the rape case she filed against Navarro.

One of her lawyers, Salvador Panelo, filed a letter in Cornejo’s behalf addressed to CHR Chair Loretta Ann Rosales.

In the letter, she alleged that the dismissal of the rape charge against Navarro was due to the pressure exerted by a top ABS-CBN talk show host and actress on the investigating prosecutors.

The letter did not identify the celebrity who, Panelo said, used her influence to have the case against Navarro dismissed. With Kristine Mangunay