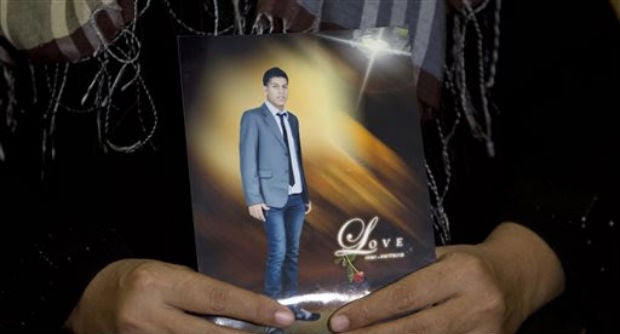 In this Tuesday, Sept. 16, 2014 photo, Palestinian Ahlam Abu Toaimeh, 47, holds a picture of her son Mohammed Abu Toaimeh, 22, as she speaks to an Associated Press reporter at her house in the town of Abasan, in the southern Gaza Strip. AP

ABASSAN, Gaza Strip — The university student was desperate to flee Gaza after suffering through years of border closures and three wars.

In early September, a week after the latest war between Gaza’s ruling Hamas and Israel, 22-year-old Mohammed Abu Toaimeh crossed into neighboring Egypt. He handed $2,000 to traffickers and boarded a ship that was to smuggle him to Europe.

Instead, he and dozens of other Gazans are missing amid reports that smugglers sank their vessel on purpose.

Mohammed’s mother, Ahlam, is plagued by guilt because she helped him scrape together money for the trip. “I had hoped he could begin a new life, better than this life of war and destruction,” she said in between sobs.

In the past two months, more than 1,300 Gazans are believed to have crossed into Egypt, some even sneaking in through a border tunnel, to embark on illicit sea voyages, said Ramy Abdu, a human rights activist tracking the trafficking.

It’s a new escape route and a measure of growing desperation in the crowded sliver of land where two-thirds of those under 30 are unemployed.

Dreams of emigration are common in Gaza, with polls regularly indicating more than 40 percent would leave if given a chance. Traditionally, young men in Gaza have been encouraged by their families to work abroad and send money home.

In recent years, some avenues of escape remained open, despite a border blockade imposed by Israel and Egypt after the Hamas militant group’s takeover of Gaza in 2007.

Most would-be emigrants have flown to Europe or the Far East from Egypt, often on student or tourist visas, and then attempted to stay. Travel on migrant boats was unusual.

However, options diminished after Egypt’s military toppled a Hamas-friendly government in Cairo in mid-2013. Egypt’s new rulers sealed hundreds of smuggling tunnels under the border, cutting Gaza’s main economic lifeline, and tightened travel restrictions. The restrictions sharply reduced the number of Gazans allowed to cross legally into Egypt and those who were permitted to fly from Cairo’s airport.

The recent 50-day war only strengthened the belief of many here that they have no future in Gaza.

More than 2,100 Gazans were killed and more than 18,000 homes destroyed in the fighting. With Hamas sticking to its militant ideology, there are no signs that Israel and Egypt will ease the blockade significantly.

In mid-July, about a week after the outbreak of the war, a gang of Egyptian smugglers and Palestinian middlemen began advertising sea trips to Europe as cheap and safe, said Abdu.

Word of the boat trips quickly spread among the young men of Gaza, including Mohammed Abu Toaimeh, his 26-year-old brother Firas and their 19-year-old cousin, Hussein al-Jorf, who pleaded with their parents to raise the money.

There was little to keep the three in Gaza.

Mohammed and Hussein were studying law at a Gaza City university, with little prospect of employment after graduation.

Mohammed and Firas lived together in their family’s old home, which during the war was seized by Israeli soldiers. Mohammed’s bedroom had served as a sniper’s position, with two holes cut into a wall at shoulder level and the words “west” and “southwest” scribbled in Hebrew next to them.

In the end, Firas stayed in Gaza because his parents couldn’t afford the voyage for both sons. Hussein left Gaza on Sept. 1 and Mohammed followed two days later.

Both entered Egypt legally via the Rafah border crossing with Gaza, after having obtained papers naming each as an escort for a parent seeking medical treatment in Egypt, the mother, Ahlam, explained.

She said she and Mohammed reached the port city of Alexandria after a nine-hour drive. There, they handed $2,000 to a smuggler who called himself “Abu Hamada, the Syrian” and put them up in an apartment along with six other migrants.

Ahlam, a 47-year-old mother of eight, said she last spoke to Mohammed by phone on Sept. 6 after a bus took him and Hussein to a waiting vessel.

The International Organization for Migration said the ship sailed from the Egyptian port of Damietta that day with about 500 Palestinians, Syrians, Egyptians and Sudanese on board, including about 100 children. Abdu said 120 Gaza natives were on the ship.

After four days at sea, smugglers intentionally rammed the vessel southeast of the island of Malta when the migrants refused to switch to a smaller boat they deemed unsafe, the migration organization said, citing survivor testimony.

The witnesses told the IOM that about 300 people on the lower deck were trapped and drowned immediately, while others held on to each other or flotation devices. The fate of Mohammed, Hussein and others from Gaza is unknown.

Zakariya Assouli, a Palestinian immigrant in Sweden, said his uncle, Shukri, was among the survivors and confirmed the boat was intentionally rammed.

Shukri Assouli was picked up by a freighter and flown to Greece, but his wife and two small children are missing, Zakariya said by phone.

He said his uncle had planned to join him in Sweden. “He was looking for a better future for him and his children,” he said. He said he lost contact with the uncle after their conversation.

The number of migrants and refugees from Africa and the Middle East trying to get to Europe by boat is growing, and more than 110,000 have reached Italy alone so far this year, said Carlotta Sami, a spokeswoman for the Italy office of the main U.N. refugee agency. Newcomers often try to get from there to other European countries, she said.

Sami said she’s seen an increase in the number of arrivals from Gaza over the past few weeks, but didn’t have exact figures.

Maj. Gen. al-Anani Hammouda, security chief in the Egyptian coastal region of Marsa Matrouh, said the number of European-bound Palestinian migrants in his area has increased dramatically in recent weeks.

“We were used to migrants from African countries, Bangladesh, or Syrians. But over the past month, we have been seeing a large number of Palestinians among the migrants,” he said.

On Sunday, 47 Palestinians were among more than 150 migrants caught in a fishing boat off Alexandria. Elsewhere, a Palestinian arrested in Alexandria on Saturday told authorities he had entered Egypt through a tunnel from Gaza.

In Gaza, a Hamas police spokesman said several suspected traffickers have been arrested.

Firas, the brother of Mohammed, said he expects the exodus to continue. “Even after the incident (with the capsized ship), everyone is eager to get out,” he said.

While many leave through the Rafah crossing — either with medical referrals or by bribing Egyptian officials — more than 200 are believed to have left through a border tunnel, Abdu said.

Firas said a fake medical referral costs $400, while a trip through a tunnel costs an additional $1,800.

He said Abu Hamada told him that he can “connect us with people in Egypt to stamp our passports” in the event of the tunnel option.

Since the disappearance of his brother, Firas has put his emigration plans on hold to spare his mother more pain.

“It’s enough that we lost one,” he said.