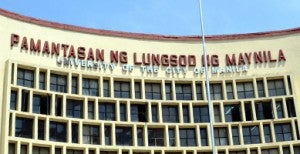 The newly appointed officials of the Pamantasan ng Lungsod ng Maynila (PLM) have a tough task ahead of them.

Manila Mayor Joseph Estrada’s directive to PLM president Leonora de Jesus and Board of Regents chair Benjamin Diokno were to unite the city-run university behind them in the face of a long-running rift among officials and improve the quality of education offered by the institution.

This was what De Jesus revealed to the Inquirer in a phone interview after she took her oath before Estrada on Wednesday.

“One of his (Estrada’s) marching orders was to get everybody together to work for the objectives of the school so it could be more productive,” said De Jesus, who was the chief of the Presidential Management Staff during Estrada’s presidency. Diokno, on the other hand, served as Estrada’s budget secretary back then.

De Jesus will succeed former Justice Secretary Artemio Tuquero as president, while Diokno will take over from former University of the East College of Law Dean Amado Valdez as chair of the Board of Regents.

Estrada also ordered De Jesus to uplift the quality of education offered by the city for free to the poor.

Toward this end, she said that one of her first tasks after she is sworn in is to compare the PLM’s educational standard to that of other universities in the Association of Southeast Asian Nations.

“There is an accepted benchmark or standards for universities, one of which is for Asean and another is globally. We will use the Asean benchmark to check where PLM is relative to these standards,” de Jesus said.

“We will then come up with a plan to improve standards to make it at par with other Asean universities. I’d like this university to serve the needs of the poor but talented people of Manila who cannot afford private education,” she said.

De Jesus also mentioned the PLM’s “good” passing rate in professional licensure exams for nursing, medicine and law, among others, as a good sign for the school.

“It is also exciting that PLM appears to have an Open University, a facility for people to be able to get college or masters’ education without going to school,” she said.

De Jesus is optimistic that there will be harmony in PLM’s boardroom, citing the fact that she has worked with Diokno in the past.

“The mayor said he likes people he can trust, and the good thing is me and Ben have worked together before,” she added.

The two executives, who were appointed by Estrada earlier this week, will see out the remainder of Tuquero’s and Valdez’s six-year terms, which began last year.

Last week, Estrada ordered Tuquero and Valdez, along with board members lawyer Renato dela Cruz, Adelaida Rodriguez-Magsaysay, lawyer Ramon Bagatsing Jr., and professor Estrellita Bautista, to tender their courtesy resignations, citing the “serious damage” their “differences and disagreements” have caused to the operation of the university.

Estrada accepted Tuquero and Valdez’s resignation, while the rest of the board were retained.

De Jesus and Diokno are expected to start working today.