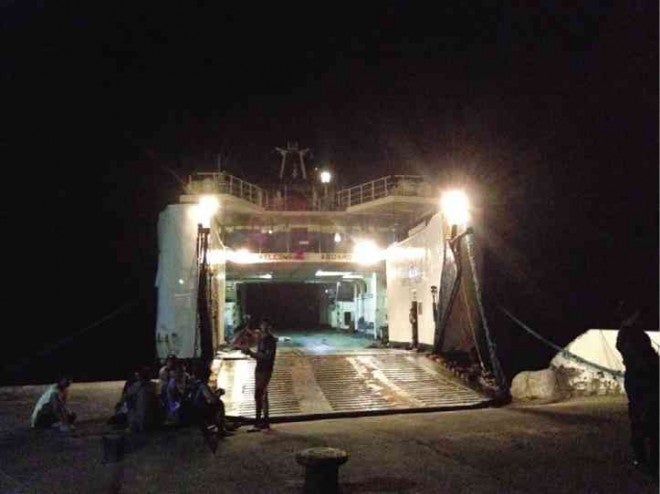 SURIGAO CITY—Relatives of victims and survivors of the sinking of a government-owned ferry are protesting what they said was the incompetence with which authorities handled the disaster, which killed at least eight passengers.

Search and retrieval operations at sea for missing passengers of MV Maharlika 2, a ferry coowned by the Department of Transportation and Communications (DOTC) and Department of Public Works and Highways (DPWH), have been called off Wednesday.

Survivors said the ferry shipmaster knew more than two hours after the ferry left the Lipata Port for Liloan, Leyte, that there were problems in the ferry’s steering.

Jessie (not Josie as earlier reported) Saberon, 57, a survivor who lost a grandchild and whose husband is missing in the tragedy, said she and other passengers had already noticed that the ferry was having engine trouble an hour after it sailed at 11.30 a.m.

“We already know that something was wrong with the ferry as early as 12:30 p.m.

because we heard the engine stop then start again,” she said.

Another survivor, 39-year-old Sarah Andil, recounted that after being told that MV Maharlika 2 was experiencing problems, the crew had repeatedly assured passengers that a rescue ship was on its way.

No rescue ship came as promised and by 5.30 p.m., an order was given to abandon ship, said Andil, a native of Cotabato City.

Saberon, who was separated from her husband and 2-year-old grandchild when she fell from the ferry, recounted seeing a flare from the vessel before it completely sank roughly 30 minutes after the order to abandon ship was issued.

“I saw the tip of the ferry as it disappeared from the water, and it was already dark,” she said.

Saberon said she landed on a creaky lifeboat that was smashed minutes later by giant waves.

Quibol, a resident of Marihatag town in Surigao del Sur, recalled seeing only three small lifeboats, and the one that she was in sank around

9 p.m., over an hour before they were rescued.

The three survivors lamented the snail-paced rescue operations and said more lives could have been saved had rescue vessels been deployed as early as 2 p.m. when it was first announced that the ferry was having engine trouble.

‘Took so long to rescue’

“Why did it take so long to rescue us?” Quibol said.

Manuel Coro, head of the local disaster management team, agreed with the passengers, saying maritime agencies should have used all available vessels in the area for the rescue effort.

But Noel Torralba, head of the Philippine Coast Guard’s Lipata Port substation, said the only available vessels for

rescue operations at that time were small ones “that can’t stand the huge waves.”

MV Maharlika 4, another ferry of the company that operated the ill-fated vessel, was sent to the area, Torralba said.

Maharlika 4 and three other vessels were able to save 110 passengers in rescue operations that lasted until the next day.

Capt. Joseph Coyme, deputy commander of the Coast Guard in Western Mindanao, and Coro said the search and rescue operations had ended Wednesday although there are still missing passengers.

Saberon and other survivors protested the move. “I won’t go home until my husband is found dead or alive,” she said.

Aside from Saberon’s husband, still missing are passengers Noel Colminar and Alberto Labadan. They were not officially considered passengers at first.

Emmanuel Carpio, regional director of the Maritime Industry Authority (Marina) in Caraga, said a team from Marina has started investigating the case on Wednesday.

Following the ferry’s sinking, Carpio said all vessels in the region have been ordered inspected to determine seaworthiness.

In the case of the sunken ferry, he said MV Maharlika 2 was issued a certificate of public conveyance and seaworthiness on Sept. 9, 2014.

“There were minor issues during our inspection but it was declared seaworthy because it complied with the basic requirements,” the Marina official said.

Maharlika 4, the sister ferry of the sunken vessel, was suspended from its operations. Danilo V. Adorador III, Inquirer Mindanao with a report by Jerry Esplanada in Manila