Arroyo may only be suspended through Congress vote 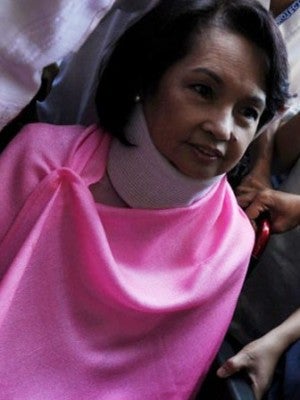 MANILA, Philippines — The House of Representatives will have to vote as a chamber if it would suspend former President and now Pampanga Representative Gloria Arroyo for graft over the NBN-ZTE deal, a House leader said.

Majority floor leader Mandaluyong Representative Neptali Gonzales II said under the Constitution, the lower chamber will have to get two-thirds vote before it could implement the order from the Sandiganbayan to suspend Arroyo over her graft case.

“In the past, we follow what is strictly provided for in the Constitution, that any member of Congress can be suspended only for disorderly behavior upon two-thirds vote of all members,” Gonzales told reporters on Wednesday.

He said to his knowledge, the lower chamber has not yet suspended any member of the House. Gonzales said two congressmen faced suspension orders from the anti-graft court, but they voluntarily complied with the order.

“In the past, I don’t remember any instance in the House that it has ever suspended any member upon the order of the Sandiganbayan,” Gonzales said.

In a letter to Speaker Feliciano Belmonte Jr. the anti-graft court on July ordered the lower chamber to suspend Arroyo for 90 days over graft in connection with the controversial NBN-ZTE deal.

The court, in a letter received by Congress on Sept. 11, wrote to Belmonte, asking for an explanation why the chamber has not yet suspended Arroyo.

Gonzales said the Speaker has no authority to implement the suspension order.

“The Speaker, on his own, is not allowed under the rules to effect suspension any member of the House,” Gonzales said.

State prosecutors had filed the motion to suspend Arroyo from public office, noting that under the anti-graft law, suspension is mandatory for officials who are facing valid graft charges.

Arroyo, for her part, said suspending her from public office was unconstitutional because it would deprive her constituencies in Pampanga’s second district representation in Congress.

Arroyo was charged with two counts of graft and one count of breach of the code of conduct for public officials for her approval of the NBN deal, a $329-million national broadband network deal with China.

Arroyo was accused of approving the deal despite knowing its irregularities, and for having lunch and playing golf with ZTE officials while their broadband project proposal was still being assessed by government.

Arroyo later canceled the project after a scandal over its supposed overpricing and the alleged bribery of public officials erupted. The project would have interconnected government offices nationwide through broadband technology.

The Office of the Ombudsman had said that the deal was overpriced and disadvantageous to the government.

Arroyo is under hospital arrest at the Veterans Memorial Medical Center in a separate plunder case involving charity intelligence funds.

In the Senate, the chamber implemented the Sandiganbayan’s order to suspend Senators Juan Ponce Enrile and Jose “Jinggoy” Estrada as they face plunder and graft charges over the pork barrel scam. The chamber is only waiting for the court to uphold the suspension order of another accused, Senator Ramon Revilla Jr.