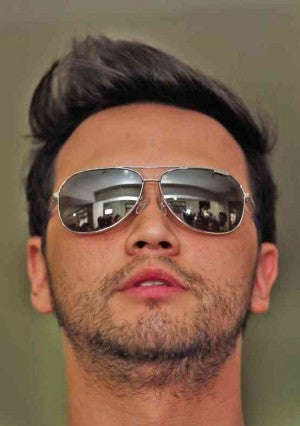 Television host Billy Crawford pleaded not guilty on Tuesday morning to multiple charges filed against him after he barged into a police station while he was drunk and figured in a shoving match with lawmen, breaking a sliding glass door in the process.

The incident in the (PCP) 7 at Bonifacio Global City on Sept. 7 resulted in the filing of two counts of resistance and disobedience to an agent of a person in authority and one count of malicious mischief against the “It’s Showtime” host.

“We believe our client is innocent of the charges filed against him,” Lucas Carpio Jr., Crawford’s lawyer, told reporters outside the Taguig Hall of Justice following the arraignment held at 10 a.m. in Branch 74 of the Metropolitan Trial Court.

Carpio said the case was scheduled for premarking of evidence on Nov. 5, a proceeding that need not be attended by his client.

“We have already prepared…the joint affidavits of two witnesses,” he added.

Based on a police report, a drunken Crawford barged into the PCP 7 in the wee hours of the morning, demanding that he be detained.

When the two policewomen on duty asked him what the matter was, the TV host repeatedly slammed his body against the station’s sliding glass door until it broke.

This led the policewomen to attempt to restrain him but he pushed and elbowed them aside, prompting them to call for backup.

The police later filed four charges against him—malicious mischief, resistance and disobedience to an agent of person in authority, direct assault and alarm and scandal, but only the first two were approved by prosecutor’s office.

Crawford did not talk to reporters when he arrived for his arraignment at 9 a.m. He briefly thanked his supporters afterward.

Jose Aspiras, Crawford’s other counsel, said the two policewomen who acted as the complainants in the case were also in court. He added that the trial proper would start on Dec. 1.