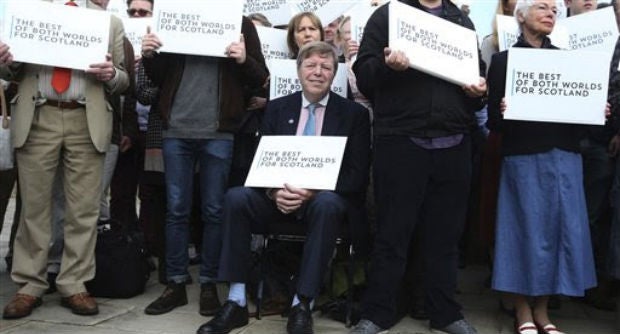 GLASGOW, Scotland — Across Scotland, dinner table talk is getting heated as families argue over how to vote in Scotland’s independence referendum. A generation gap has opened up, with younger voters more inclined to back independence and their elders tending to say they want to remain in the United Kingdom.

Support for the status quo is strongest among the over-60s, who worry about the consequences that breaking free would have on pensions, health care and savings; the pro-independence movement is largely being driven by under-40s. Neck-and-neck in the polls, the rival campaigns have called on core supporters to make a last ditch attempt to swing the vote by making the debate a family affair.

The young have been urged to visit parents and grandparents to explain why they should support separation. The No camp has launched a counteroffensive by asking seniors to win young hearts and minds with their wisdom.

“I was so proud of my grandpa when he told me he was voting Yes that I burst into tears,” said 23-year-old Miriam Brett, a campaigner for Generation Yes. “A Yes vote means so much to my generation. We want to let all our grandparents know that their future is secure in our hands, and with a Yes we can build a better future for ourselves and for our children.”

Some polls suggest the No camp is trailing in every age group except the over-60s. Opinion surveys indicate more than 63 percent of that age group is expected to vote in favor of the union. As older people are more likely to be on the electoral roll, there has been a huge drive to get younger people engaged in the Yes campaign.

Interest in the referendum is sky high. A total of 4,285,323 people, or 97 percent of the voting-age population, have registered to vote in the referendum. That’s an increase of 300,000 compared to registration figures in 2012.

The turnout for Thursday’s ballot could exceed 85 percent, compared to the just over 50 percent who voted in the last Scottish Parliament elections in 2011, and the 63.8 percent who turned out for the 2010 British parliamentary election.

Many people in the rest of Britain have recently awakened to the possibility that Scotland might leave. Thousands of Union Jack-waving demonstrators gathered in London’s Trafalgar Square on Monday in a last-minute show of affection for England’s northern neighbor.

Musician Bob Geldof and comedian Eddie Izzard were among speakers at a rally that organizer Dan Snow said was designed to show “that England cares.”

Among the electorate deciding Scotland’s fate are 124,000 16- and 17-year-olds who will be voting for the first time. Many of these new voters are expected to support independence. But conventional wisdom holds that older voters are more likely to actually cast their ballots, a factor that could help the anti-independence “Better Together” campaign.

Scottish First Minister Alex Salmond, who leads the pro-independence forces, described the Generation Yes campaign as “inspired” and said young voters now have a great excuse to pop around their grandparents’ house for a traditional Sunday lunch.

However, with polls suggesting that as many as 40 percent of families are divided over the referendum — and with at least 20 percent saying the debate has led to heated family arguments — the art of friendly persuasion has not exactly been easy.

“My Dad stopped talking to me when I said I was going to vote Yes,” said 21-year-old student Laura Brown. “He even blocked me as a friend on Facebook.”

The “Better Together” camp says older voters have a wealth of experience to impart on younger ones.

“Scotland’s 1 million pensioners should use their vote and their voice to remind their children and grandchildren of how the National Health Service and pensions were secured by the power of working together,” said former British Prime Minister Gordon Brown, a major figure in the No campaign.

“I urge you to use both your vote and your voice to remind your children and grandchildren of suffering endured together, sacrifices made together and achievements earned together with friends, neighbors and relatives in England, Wales and Northern Ireland,” Brown said. “Tell them how we fought and won two world wars together.”

It’s a message that resonates with older voters.

“They haven’t lived long enough to see what we have,” said Liz Mullen, a 68-year-old retired office worker. “A lot of young people think independence is going to be some sort of miracle cure. … They think it is some kind of adventure without any risks, but this is not a video game.”