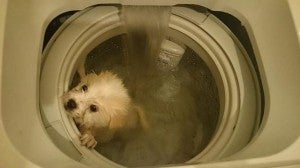 A man called Jacky Lo posted photos of him cleaning a dog inside a churning washing machine on Facebook. PHOTO: FACEBOOK/JACKY LO

HONG KONG — A man who posted Facebook photos of a puppy seemingly drowning in a washing machine has now threatened to kill several other dogs, sparking protests from netizens.

In a fresh post on the social networking site last Friday, the man, Jacky Lo, claimed to be in possession of six stray dogs, which he threatened to kill one at a time, unless netizens answered his questions correctly, the South China Morning Post reported.

“I will ask a question every seven days. I will kill a dog if your answer is wrong,” he wrote on Facebook. “The fate of the dogs will depend on you,” his post added. It was not accompanied by pictures.

Lo gained online notoriety two weeks ago when his post of a puppy being spun helplessly in a washing machine went viral. The post was accompanied by a smiley face icon and the words “feeling content.” He claimed the dog died.

Police opened an investigation against Lo for animal cruelty as nearly 20,000 netizens signed a petition demanding action. Lo then updated his Facebook page to claim he was fleeing to China.

But last Friday’s status update tags his location to Tuen Mun Town Centre in Hong Kong, and is accompanied by a smiley face icon and a message that says “feeling fabulous.”

Hong Kong’s Society for Prevention of Cruelty to Animals said it has alerted police to Lo’s latest Facebook post and urged them to expedite their investigations.