‘I might do even better’
By: Juliet Labog-Javellana - Director / @julietlabjINQ
Philippine Daily Inquirer / 01:53 AM September 14, 2014 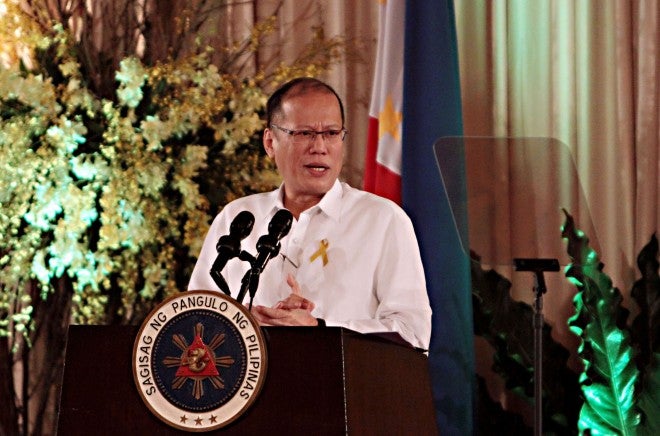 So, which is it, Mr. President?

President Benigno Aquino III opened another vein of endless speculation when he again hinted at entertaining thoughts of running for a second term, telling leaders of the ruling Liberal Party (LP) and their allies in Malacañang on Friday that he was “slightly open” to the idea of extending his term of office beyond 2016.

But then he coyly said that he was hoping that he would not be the administration presidential candidate in 2016.

Was he being serious or was it just a ploy to avoid becoming a lame duck?

In a wide-ranging interview with the Inquirer, Mr. Aquino admitted that it was “all of that,” meaning all of the reasons given.

“If I close the door (to an extension) now, it will embolden these people who want to destabilize [the government],” the President said.

Citing the second antipork barrel protest and information supposedly obtained from the opposition grapevine, Mr. Aquino said his detractors were predicting his downfall after the Supreme Court ruled his Disbursement Acceleration Program (DAP) unconstitutional in July.

“The feedback my sisters got is that they (detractors) were predicting I would last only six months after the DAP,” the President said.

And contrary to what armchair analysts say, the President said there was still time to amend the Constitution, even the political provisions on term limits that would make it possible for him to run for a second term.

“I might do even better in a second term,” he said.

The President first broached the idea of seeking a second term in a television interview last month.

His move was criticized as running counter to the legacy of his mother, the late President Corazon Aquino, who is largely credited for returning democracy to the country following the fall of the Marcos dictatorship and shunning any move to stay in power beyond her term.

Vice President Jejomar Binay, an Aquino family friend, who has long declared plans to run for President in 2016 and is now fending off allegations of corruption, also declared himself opposed to the idea.

But Mr. Aquino said he was more serious about guarding the reforms instituted by his administration, which won by a landslide on an anticorruption platform in 2010.

“Paano kung bababuyin lahat ng ginawa mo? Sisisihin ka, lalo kang pahihirapan, dadagdagan ang utang mo (What if they trample on everything you did? Blame you for everything, give you even more problems and put you in even more debt),” he said.

Mr. Aquino said he was also serious about stopping what he called “judicial overreach.”

“[Not being a lame duck] is one side of it, but my own perspective is look at what the Supreme Court is doing,” he said.

The President denounced the Supreme Court after it voted unanimously against the DAP, a controversial economic stimulus program that used the supposed savings of different agencies. The court earlier nullified the corruption-tainted Priority Development Assistance Fund (PDAF), or congressional pork barrel.

In a speech, Mr. Aquino asked the Supreme Court to reverse its ruling on the DAP, warning of a collision with the two coequal branches of government, meaning the executive and the legislature.

The President said the court had been acting without restraint toward the executive branch, citing the garnishment order against the National Power Corp. (Napocor) and the Power Sector Assets and Liabilities Management Corp. (Psalm).

A 2006 decision of the court ordered Napocor to pay P62 billion in back wages to employees found to have been illegally retrenched in 2003 when the Electric Power Industry Reform Act (Epira) was implemented.

The tribunal, however, last week ordered the garnishment deferred while the employees entitled to the back wages were being identified.

But Mr. Aquino said the earlier garnishment order would put severe constraints on the government’s finances.

“Psalm has a debt of P320 billion. If they garnish Psalm, they have no cash, then possibly some of it (debts) or most of it will all become sovereign guarantee,” he said.

He said that if the government were to assume Psalm’s P320-billion debt and Napocor’s P62-billion payment to the dismissed employees, the P500-billion budget allotted for social services and projects would be wiped out.

Previously opposed to Charter change, Mr. Aquino said he now believed there must be constitutional amendments to put a restraint on the judiciary.

Once the Constitution is opened for amendments, changes on political provisions can also be introduced, including lifting of the term limits on government officials, he said.

But here, the President said, he had some misgivings.

In allowing him or any President a second term, “that opens the ground for somebody staying in office and perpetuating [himself].”

“Think about it, if we allow a second term, then there will be those who would go for a parliamentary shift. There will be no term limits, for life. No matter how good you are, at some point in time you will be out of touch with your bosses,” he said.

“When you open the Constitution, you open it to everything,” the President said.

Mr. Aquino said there were other considerations weighing on him.

“I have to be open to the question of continuity. But I’m so very conscious also of anybody who gets damay (dragged) in the calvary. Like my Cabinet,” he said.

“I’m very fortunate to have this Cabinet but they all have sacrificed tremendously,” he added, citing as an example Interior Secretary Mar Roxas, the presumptive LP presidential candidate in 2016.

Then there are also his friends, sisters, nephews, nieces and spiritual advisers.

Mr. Aquino said the Carmelite nuns in Zamboanga, who were prayer warriors of his mother and who are now his spiritual advisers, were unanimous in not wanting him to stay beyond 2016.

Even his long-serving staff in his private office won’t vote for him if he runs again, he said.

“Aren’t we all looking at the calendar?” he quoted one of them as saying, reminding him that they had already started the countdown to his last days in Malacañang.

He said his executive assistant, Jun Delantar, was looking forward to returning to Capiz province permanently and another one wanted to go home to Tarlac province for good.

He said that when he asked his media relations officer, Undersecretary Rey Marfil, if he would join him in an extended term, Marfil flatly told him: “Sir, we’re only up to 2016. Or if not, I will only be here until 2016.”

“I can’t find any volunteers,” he said, laughing.

Then there is also the irresistible prospect of returning to a more private life.

“Go to a public place and enjoy a band without having to have a picture-taking session with everybody or just basically enjoy without anybody minding you,” said the bachelor President who is a music buff.

Noting how hectic a President’s life is, Mr. Aquino told of a recent trip to Mindoro where he and other officials inspected various infrastructure projects.

“We were taken to the Infinity Resort. When you look behind, there is a hill covered with virgin forest. Very beautiful. If you ask me for more details, I spent a long time there—10 minutes!” he said with a laugh.

Mr. Aquino said he had to cut short his trip to attend a “game of generals” for the Coast Guard in the name of camaraderie and brotherhood.

There wasn’t even time for snacks.

“Gov. [Alfonso] Umali prepared merienda—cheeseburgers were there on display. Then [an aide] said, ‘Sir, the weather is getting bad. We have to take off now. We cannot get to Calapan if we don’t leave now.’ Mar Roxas was holding out his hand [for a cheeseburger], but someone came over to shake his hands,” he said, laughing.

“I have been to so many places where you normally couldn’t go like the Kennedy Center … and all you can have is a five-minute walk,” he said, referring to official trips that are crammed with meetings.

Mr. Aquino said he was imagining  a scenario where he is leaving the Palace as the new President comes in.

Recalling his entry to Malacañang in 2010 when he succeeded President Gloria Macapagal-Arroyo (GMA), he said: “Where did I meet GMA? At the main [staircase] or the side entrance? In 600-something days, it will be me who will be going out.”

But then he again reverts to the idea of being prodded to go for a second or an extended term in order to continue his reforms and stop those he calls the enemies of reform to return to power.

There are allies and believers who want a demonstration of people power at the Rizal Park to persuade him to stay.

Roxas’ pitch: A 2nd term for Aquino to continue reforms