Morale down, La Loma cops try to move on 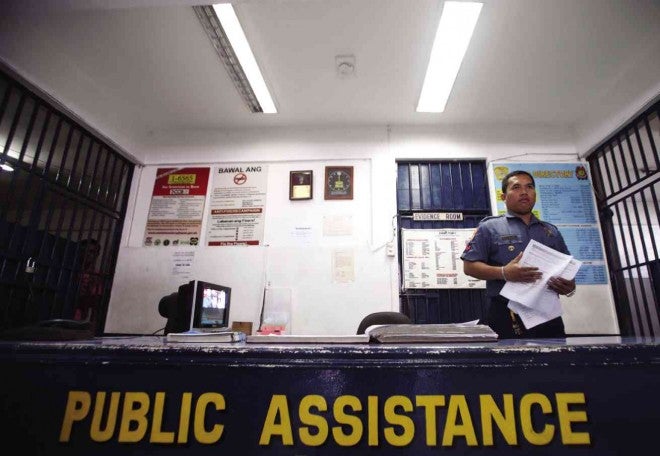 AFTER a week of bad press, the men of the QCPD La Loma station carry on. LYN RILLON

From outside, the Quezon City Police District’s La Loma station looks orderly, its operations smooth and uneventful, days after some of its members were linked to the Sept. 1 Edsa robbery-abduction.

But beyond this “normal” facade, the crime and the ensuing scandal have apparently taken a toll on the other officers, the ones who must carry on and deal with an increasingly cynical public.

They have since taken questions from friends and fellow policemen—Is it true? What really happened?— who wanted more inside info on the case in which 10 lawmen, seven of them from La Loma, are accused of taking P2 million from two men whose vehicle they blocked on the highway in broad daylight.

The most unsettling questions, though, have come from their own family members: “Daddy, are you with the La Loma police?” The innocent query came from the small child of one officer, who didn’t want his name revealed when he agreed to talk to the Inquirer on Saturday.

“Yes, but that’s okay, there’s really no problem,” the officer recalled telling his kid in reply. After that uneasy moment, he said, he later learned that some of his child’s playmates had teased him about his father’s line of work.

“Masakit (It’s painful),” PO3 Noel Bautista said of being asked by friends and neighbors about what he knew of the Edsa “hulidap” incident. “Of course, it’s a shame because it’s all over the news on TV.”

Bautista, who has a daughter currently taking up criminology, said he had tried to make light of the situation at home by jokingly advising her not to join the Philippine National Police and sign up instead with the Bureau of Fire Protection or the Bureau of Jail Management and Penology.

Yet his daughter remained firm that she would join the PNP, assuring him that “this too shall pass, Pa.”

Bautista, who has been assigned to the La Loma station since 1997, said that if the allegations against his colleagues were true, “then they have to answer for that.” What they did was a “personal na lakad” or an act separate from what the police force stands for, he added.

A senior officer, who also declined to be named, said that since the Sept. 1 incident landed the La Loma police in the news, the station’s hotline had received several angry or sarcastic callers.

One caller, for example, asked: “Why are you still in the service?!” This was after the officer who picked up the phone opened the conversation with a polite greeting and identified himself to the other person on the line.

Another caller said: “You know, sir, I used to be scared of drug addicts. But now I’m more scared of cops from La Loma.”

And more bile from another caller: “So that’s how you work! So that’s why you people are arrogant!”

Sometimes, the station personnel didn’t need to hear any of the snide remarks to know that they were being mocked. On the day the Inquirer was there, one jeep slowed down as it went past the station on Mayon Street, its curious occupants pointing at the place before driving on.

“Ayan o! (There it goes),” sighed one officer who spotted the vehicle.

For Chief Insp. Benjamin Gonzales Gabriel Jr., who has been assigned to La Loma since last year, life at the station goes on. “We’re back to normal. Our work continues.”

His friends and relatives initially thought that he, too, was involved in the Edsa hulidap case, which got them worried. “I had to assure them that I’m still reporting for duty and I don’t get myself involved in those things. But I also explained that I could not pass judgment on those being accused since I wasn’t there to witness what happened. The investigation is still going on and it will be up to the courts.”

Gabriel is a classmate of Chief Insp. Joseph de Vera, the station’s deputy commander who was the first to be arrested for the crime. “In our many years working together, I find him to be hardworking and dedicated. We’ve had a lot of accomplishments.”

“I had no knowledge of his involvement (in criminal activities). But if they really did it, they should face the consequences. That’s the law,” Gabriel said.

Supt. Dionisio Bartolome, the newly appointed station commander, said his immediate assignment was to “normalize the operations and look into the morale of people.”

“Some of them are really dismayed. But in police work, what happened is no reason for you to lose heart and stop performing your duties. If your superiors are under fire, it doesn’t mean you won’t work anymore because of low morale.”

Addressing critics, he said: “Out of the 139 policemen under our station, only five percent were tagged (in the Edsa robbery-abduction). So let’s not generalize.”

On an encouraging note, one of Bartolome’s former superiors recently sent him a message saying: “You clean up La Loma and then you invite me for lechon (roast pig, the delicacy the district is famous for).”