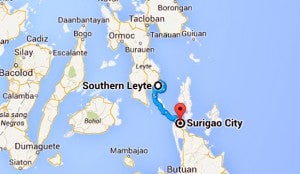 Strong waves spawned by the southwest monsoon caused the Maharlika 2, a roll off, roll on vessel, to sink in the afternoon, Southern Leyte Governor Roger Mercado said in a live radio interview.

The ship, which came from Surigao City was scheduled to dock in Liloan town, Southern Leyte at 5 p.m., Ricardo said.

But Commander Armand Balilo, spokesman of the Philippine Coast Guard, said in a separate interview that based on initial reports, the ship was “dead on water” and was not sunk by strong waves.

He said based also on initial reports that there were 84 people on the ship – 56 adults, 2 children, and 26 crew.

He said three ships – the Maharlika 4, a sister vessel; St. Martn; and an unnamed third vessel – have responded and were conducting search and rescue operations.

He could not say how many persons were rescued as the figures would be subject to confirmation by the Coast Guard.