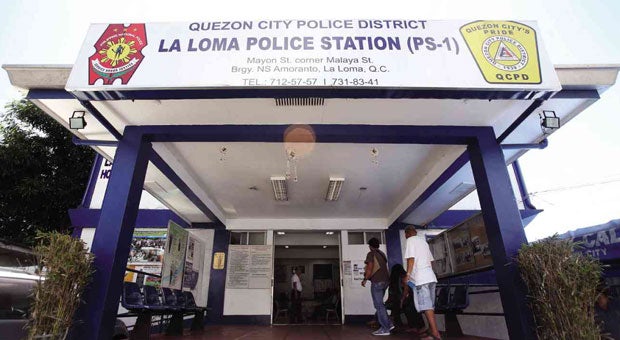 PRECINCT OR CRIME SCENE? The La Loma station of the QCPD, whose members are being linked to the Sept. 1 Edsa “hulidap” incident and where the victims of the robbery-abduction were allegedly detained for seven hours. LYN RILLON

Rogue cops use either the “ninja style” or the “bangketa style” in pulling a robbery, the new commander of the La Loma Police Station in Quezon City said on Friday.

But whichever style they use, the job is called “hulidap,” a combination of “huli” or arrest and “holdup.”

In plain language, the crime is called highway robbery.

And that is what 10 policemen from the La Loma Police Station did when they blocked the path of a vehicle and arrested its two occupants on a stretch of Edsa in Mandaluyong City in the afternoon of Sept. 1.

The cops took Samanodin Abdul Gafur and Camal Mama to the La Loma Police Station, where they took P2 million that the two men carried to pay for a piece of heavy equipment.

Not satisfied, the policemen also took the two men’s ATM cards and withdrew P119,000 from their bank accounts.

They freed the two men at 9 p.m., warning them not to report what happened or they would kill them.

Supt. Dionisio Bartolome, the new commander of the La Loma Police Station, is familiar with the tactic, as he was one of the Philippine Drug Enforcement Agency (PDEA) officers who discovered and busted the criminal operations of some members of the Philippine National Police Academy Class of 2001 in October 2006.

The ninja style, Bartolome said, follows police procedure and the targets are usually people involved in the illegal drug trade.

“They follow police procedure and prosecute suspects, but only if the bust has become known so there will be no administrative case. Clean. The action is swift and surgical, that’s why it’s called ninja,” Bartolome said.

“They take part of the seized drugs to sell on the street, but not too large an amount because the syndicates will know,” he said.

Bartolome did not explain, but it seems that dumping a large amount of drugs on the street costs the syndicates, who complain—to whom is not clear.

The bangketa style of operation is also swift but loose, Bartolome said.

“It’s called bangketa because the targets are not really involved in illegal drug operation. They are targets of opportunity and are not taken to the precinct. The cops and the targets fix the case among themselves,” he said.

The Sept. 1 robbery on Edsa appears to be a combination of ninja and bangketa, according to Bartolome.

“My analysis is, they were not sure if they had a hold on their targets, that’s why they released them and opted for the bangketa style,” he said.

La Loma cops get another blackeye over 2011 case