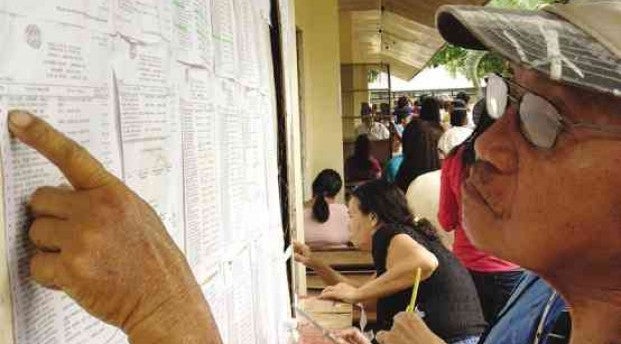 A VOTER searches for his name on the voters’ list, which, despite claims to having been cleansed, still contains dead people’s names. JULIE ALIPALA / INQUIRER MINDANAO FILE PHOTO

MANILA—A cleansing of the certified list of almost 1 million overseas voters is necessary to ensure honest and credible elections in 2016, two lawmakers from Mindanao told the Commission on Elections  on Friday.

“An updated Certified List of Overseas Voters will ensure the credibility of elections and will ensure that the result of the elections [reflects] the will of the people,” they said in a statement Friday.

The Rodriguez brothers recalled that five months before the May 2013 elections, the Comelec de-listed some 200,000 registered voters abroad for failing to file a manifestation of intent to vote in the elections.

Comelec Chair Sixto Brillantes earlier announced that the number of registered overseas voters had risen to almost a million for the May 2013 elections.

“This number is quite significant and can affect the results of the elections, which is why there is a need to ensure that the voters’ list is updated and all persons on the list are qualified to vote,” the older Rodriguez said.

Under Republic Act 10590, or the Overseas Voting Act of 2013, the Comelec is mandated to maintain a National Registry of Overseas Voters containing the names of registered overseas voters and the posts where they are registered.

Under the same law, the Comelec is mandated to prepare the Certified List of Overseas Voters not later than 90 days before the start of the overseas voting period, and furnish within the same period electronic and hard copies of the list to the appropriate diplomatic posts, the Rodriguez brothers said.

Copies shall also be posted in their respective bulletin boards and/or websites within 10 days from their receipt, they added.

The resolution has been referred to the House committee on suffrage and electoral reforms chaired by Capiz Rep. Fredenil Castro for consideration.