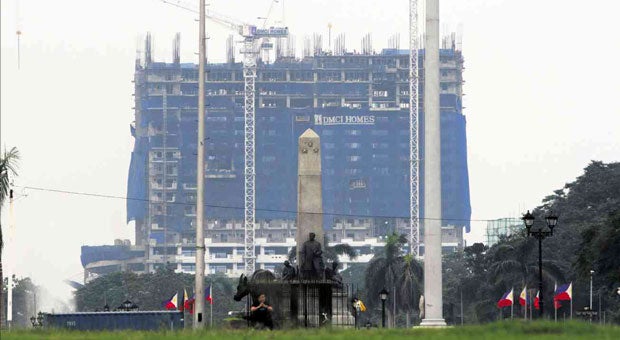 RIZAL IN CONDO’S SHADOW The construction of the Torre de Manila, which mars the view of the Rizal Monument in Manila, continues despite calls from various groups to stop the building. EDWIN BACASMAS

MANILA, Philippines–Groups opposed to the construction of a condominium within view of the Rizal Monument in Manila on Friday went to the Supreme Court to seek its complete demolition.

The Knights of Rizal (KOR) and Las Damas de Rizal Philippines, Inc. filed a petition before the high court seeking “the immediate and complete demolition of Torre de Manila, a DMCI Homes project, to clear the view of the Rizal Monument and the Rizal Park for posterity.”

The petitioners said they decided to go to the high court to prevent “the permanent desecration of a National Cultural Treasure that is the Rizal Monument and a historical, political, socio-cultural landmark that is the Rizal park.”

“We join hands with all other groups and citizens here and abroad in condemning this blatant disrespect to our heritage,” said Las Damas president Amalia Rosales.

In its petition, the Order of the Knights of Rizal (KOR), which was established in 1911 and given legislative charter in 1951, asked the high court to issue a restraining order against the construction of the Torre De Manila condominium.

Once the project is fully completed, petitioners said it will “stick out like a sore thumb, dwarf all surrounding buildings within a radius of two kilometers.

“Worse, a completed Torre De Manila would forever ruin the sightline of the Rizal Monument in Luneta Park: Torre De Manila building would loom at the back and overshadow the entire monument, whether up close or viewed from a distance…Moreover, the importance of the landmark that is the monument will be devalued,” petitioners said.

“Torre De Manila will surely destroy the scenic view of the Rizal monument, which serves as the symbol of our great race and unique image of our nation, as well as the Rizal Park,” petitioners said in a statement.

“The monument is the identifying mark of our country’s irreplaceable greatness where all foreign dignitaries, state visitors and the like pay homage and offered respect thereof,” the petitioner said.

They added that the 1987 Constitution itself requires the conservation, promotion of the country’s historical and cultural heritage.

Petitioners added that the project is also considered a nuisance as stated under Article 694 of the Civil Code of the Philippines because it “annoys or offends the senses; or shocks, defies or disregards decency or morality.”

The project, KOR said, deprives the monument the attributes of light and view that bestow it with grandeur stripping away part of the ambiance that Filipinos have enjoyed for the past hundred years.

“The despoliation of the sight view of the Rizal monument is a situation that ‘annoys or offends the senses’ of every Filipino who honors the memory of the national hero Jose Rizal,” KOR petition said adding that “it deserves to be abated summarily, even without need of judicial proceeding.”

Petitioners added that the construction is also in direct violation against Manila’s zoning law under Ordinance No. 8119. The building’s maximum gross-floor-area-to-area-of the-plot ratio is 7.79 but the law only allows 4.

KOR told the high court, the sooner a restraining order is issued, the less damage to DMCI Homes Inc. (DMCI) which will be spared from putting in money on the construction.

Senator Pia Cayetano, who chairs the chamber’s Committee on Education, Arts and Culture, also initiated an investigation into how DMCI was granted a permit to build the high-rise despite zoning restrictions.