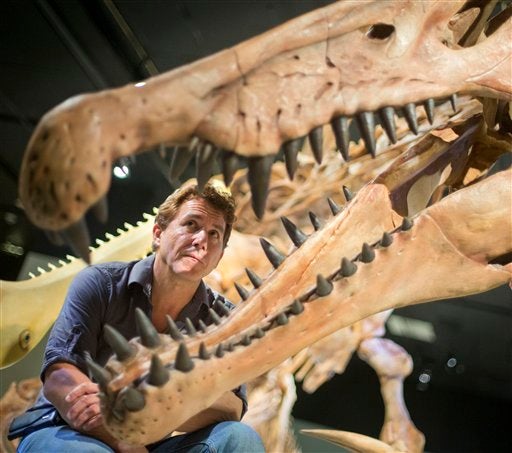 University of Chicago Paleontologist Paul C. Sereno looks inside the jaws of a 50-foot life-size model of a Spinosaurus dinosaur at the National Geographic Society exhibit in Washington, Wednesday, Sept. 10, 2014. AP

WASHINGTON — Picture the fearsome movie creatures of “Jurassic Park” crossed with the shark from “Jaws.” Then super-size to the biggest predator ever to roam Earth.

Now add a crocodile snout as big as a person and feet like a duck’s. The result gives one some idea of a bizarre dinosaur scientists have just unveiled.

Lead discoverer Nizar Ibrahim of the University of Chicago said it’s so weird that studying it was like working on an extraterrestrial.

The 50-foot (15 meter)-long predator is the only known dinosaur to live much of its life in the water.

Scientists had some bones from the beast already, but the new skeleton discovery forced a major rethinking of what it looked like some 95 million years ago.

The result was described Thursday in the journal Science.