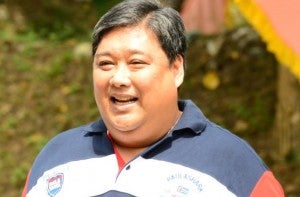 DIGOS CITY, Philippines – Davao del Sur Governor Claude Bautista appealed to law enforcers in the province not to be discouraged by setbacks they have encountered in pursuing offenders, such as those involved in the illegal drug trade and illegal gambling.

Bautista issued the call amid complaints from police authorities that their anti-drugs and anti-gambling efforts were being laid to waste because a large number of cases filed had either been out-rightly dismissed or downgraded into light offenses.

Speaking to the Philippine Daily Inquirer on condition of anonymity, police officials in the province said countless operations had been conducted against suspected offenders but the suspects ended up being charged with light offenses or walk out of jail after they were instantly cleared at the prosecution level.

“We believed we had airtight cases but its disheartening to find out later that our efforts were wasted in many instances. The suspects would eventually be charged with offenses that are way below the original complaints we had filed or they are instantly cleared,” one police official said.

Bautista said he was aware of the predicament faced by police authorities and admitted he too had received similar complaints.

“I don’t know where lies the problem but I hope it is not as we suspect; that some of those handling the filing of the cases in court are acting in bad faith,” he said.

Bautista said he wanted to find out why some suspects, as in the case of a man nabbed for selling shabu (methamphetamine hydrochloride), had only been charged with mere possession of the illegal substance shabu even if he had been caught red handed for selling it.

“Maybe what our police should do is to make sure the case is airtight before filing it. If an airtight case ends the same, then something could be very wrong,” he said.

Digos City Mayor Joseph Peñas said being a lawyer himself, he understood the predicament of police authorities in the province.

But Peñas said the successful prosecution of suspects depended on solid evidence and argumentation that the police would build.

“If the case is haphazardly filed, then it would be dismissed,” he said.

“It is not enough to just arrest suspects. We should be very meticulous in citing laws and make sure that our arguments and pieces of evidence are solid to stand in court or gain the support of prosecutors,” he said.