Peace in South at hand

‘Allah’ to ‘Almighty,’ out with ‘devil in the details’ in Moro law
By: Juliet Labog-Javellana, Nikko Dizon - @inquirerdotnet
Philippine Daily Inquirer / 12:57 AM September 11, 2014 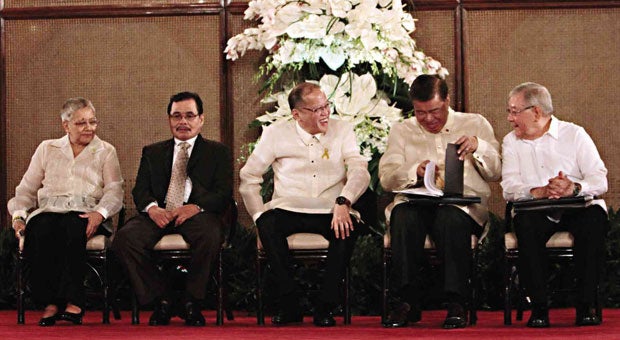 MANILA, Philippines–“Allah,” “reserved” and “general supervision of the President” over the Bangsamoro region were among the contentious details that bogged down work on the final draft of the proposed Bangsamoro Basic Law (BBL).

President Aquino finally got the “clean copy” of the draft bill on Tuesday night.

“We needed enough time to study every provision in our proposed [law]. This was a long and thorough process, because we went through every detail involved in fulfilling our shared desires for the Bangsamoro region,” Aquino said.

On Wednesday, he submitted the proposed Bangsamoro Basic Law to the leaders of Congress in ceremonies held at Malacañang’s Rizal Hall.

It was a crucial step in Aquino’s attempt to end four decades of conflict in Mindanao.

“We have taken yet another step toward a more peaceful and more progressive Mindanao,” he said after turning over the bill to Senate President Franklin Drilon and Speaker of the House Feliciano Belmonte Jr.

Aquino called for the passage “in the soonest possible time” of the proposed law that would have the Bangsamoro governing a new autonomous region in Mindanao, which he called a “just and fair deal for all.”

The draft was supposed to have been submitted to Congress two months ago, but the government reviewed it and made changes that took both sides three hand-wringing “working sessions” from July to August to iron out.

“[There was so much] back and forth. Basically we agree on what has to be achieved, but how do you actually express these in words, that’s where the disagreement came in,” the source said.

The government team argued that the Bangsamoro would not only be for Muslims but also for Christians, Lumad and other indigenous peoples in the territory.

The source said the President also objected to the provision stating that the exploitation of resources in the new autonomous territory would be “reserved” for the Bangsamoro people.

“How do you operationalize that? Do you have a cedula (residence certificate) dating back to 1521? Is there a list of the owners down to the present in the Koran?” the source quoted the President as asking.

According to the source, the President also pointed out that those who would be deprived of the rights to the resources would object to that provision.

So in the final text, “reserved” was changed to “preferential.”

Section 11 of Article 13 outlined the “preferential rights of bona fide inhabitants over the exploration, development and utilization of natural resources, including fossil fuels and uranium.”

But one of the most contentious points, according to the source, was when the draft became silent on the authority of the President over the proposed Bangsamoro region.

“When you remove that [provision], how can we say that we are under the same republic? Those who have reservations about you (Bangsamoro), who will they turn to?” the source said, quoting the President.

The provision stating that the “President shall exercise general supervision over the Bangsamoro government to ensure that laws are faithfully executed’ was restored in Section 3, Article 6 on Intergovernmental Relations.

The terms were so sensitive that the government legal team had to drop the phrase “the devil is in the details” in referring to the nitty-gritty of autonomy.

“[The Muslims] deserve more because they have been left behind,” the source said, quoting the President.

The Opapp explained that Article X, Sec. 20, of the Constitution “confers the Bangsamoro government, as an autonomous region, with legislative powers over such matters as administrative organization, and ancestral domain—which is not granted to local government units.”

“However, similar to local government units, the President’s power of general supervision remains,” the Opapp said.

“Supervision,” as lawyers would explain, is a technical term in constitutional law that allows the President to “oversee without substituting his judgment for another’s judgment.” It may mean the President has the need to know everything.

“In applying and/or using specific provisions of the Constitution, as they relate to the contents of the draft Bangsamoro Basic Law, a degree of liberality has to be observed, keeping in mind that too restrictive application and/or interpretation of the fundamental law would frustrate our quest and aspiration for peace. We have to be guided by the legal maxim that ‘the will of the people is the supreme law,’” Yasmin Busran-Lao, secretary of the National Commission on Muslim Filipinos and a member of the government peace panel said in a statement released by Opapp.

“Flexibility in accommodating proposals, suggestions and positions aimed at reflecting in the draft basic law the spirit and intent outlined and manifested in the duly signed Framework Agreement on the Bangsamoro, has to be applied,  provided that the same will not compromise basic constitutional principle,” Lao said.

When the bill is passed into law, a plebiscite will be held for the creation of the Bangsamoro autonomous region, which will replace the Autonomous Region in Muslim Mindanao (ARMM).

The ARMM is the political entity created under Republic Act No. 9054, the result of the 1996 peace agreement between the government and the Moro National Liberation Front (MNLF).

The ARMM remains impoverished and Aquino has called it a “failed experiment.”

The plebiscite for Bangsamoro will be held in the ARMM provinces—Basilan, Lanao del Sur, Maguindanao, Sulu and Tawi-Tawi—and areas covered by the basic law.

The draft law specifies that the Bangsamoro government, which is parliamentary in form and will be headed by a chief minister, will have fiscal autonomy.

“The funding mechanisms employed in this law will allow the Bangsamoro government to become self-sufficient and will no longer need funding from the national government to provide for the needs of its constituents,” the Opapp said.

The bill also provides for an annual block grant, the automatic appropriation to be released to the Bangsamoro government immediately following the year the basic law takes effect.

The annual block grant will be the equivalent of 4 percent of the net national internal revenue collection of the Bureau of Internal Revenue. This is less than the internal revenue allotment of local governments, the Opapp said.

Development of the region

As part of the normalization process, the draft law says that the central government will provide support for the intensified development efforts for the rehabilitation, reconstruction and development of the Bangsamoro.

The central government will provide a special development fund amounting to P7 billion for the first year upon the ratification of the Bangsamoro Basic Law.

The fund will be increased to P10 billion in the second year, to be paid out in five years amounting to P2 billion a year. The amount will be released at the beginning of each fiscal year of the Bangsamoro government.

The draft law also provides for the reserved powers of the central government, which includes defense and external security, foreign policy, coinage and monetary policy, citizenship and naturalization, among other matters.

The Bangsamoro Police will be part of the Philippine National Police.

The Bangsamoro government, on the other hand, will have 58 exclusive powers, including conducting barter trade and countertrade with Southeast Asian countries, establishing economic zones and industrial centers, exclusive power over ancestral domain and natural resources, and the protection of the rights of the indigenous people in the Bangsamoro in accordance with the United Nations Declaration on the Rights of Indigenous Peoples.

Concurrent or shared powers between the central government and the Bangsamoro government will include social security and pension, land registration, human rights and humanitarian protection and promotion, disaster risk reduction and management, and the administration of justice “with due regard to the powers of the Supreme Court and the competence of the Bangsamoro government over Shariah courts and the Shariah justice system.

The Bangsamoro Parliament will have a wali, the Arabic term for guardian, who is a respectable member of society.

The wali will administer the oath of office of the chief minister and the members of Parliament.–With a report from AFP