MANILA, Philippines—It wasn’t easy for Renato Corona to forget the very public snub he got from President Benigno Aquino III for being an unwanted midnight appointee as Chief Justice of the outgoing Arroyo administration.

Standing as an outcast among the guests at Rizal Park during Mr. Aquino’s inaugural when he should have been swearing in the 15th President of the republic was difficult to erase from memory. 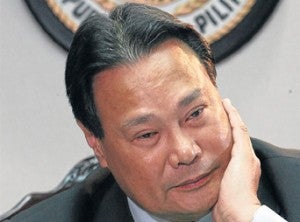 ONE YEAR AFTER Corona is confident he and the President would be able “to work well with each other.” NIÑO JESUS ORBETA

But Corona, who was one of the more controversial eleventh-hour appointments made by President Gloria Macapagal-Arroyo before she stepped aside, does not dwell on the past.

“I have been ultra-patient, ultra-forgiving, and I think, ultra-Christian, in the way I have conducted myself. You should not be onion-skinned in a job like this,” Corona told the Inquirer recently.

“My job is to decide cases fairly, according to my conscience, the Constitution, the law. No personal feelings, emotions involved.”

The 63-year-old Corona—one of the youngest to lead the gods of Padre Faura—looked relaxed and dapper in a dark suit that morning in his Supreme Court office in Manila in his most candid interview yet since he assumed office a year ago today (Tuesday).

Self-effacing and showing an unabashed devotion to his faith, it was hard to imagine that the country’s 23rd Chief Justice must have had the most politically difficult first year in office.

But he survived the relentless criticisms by employing what he had learned for the past 19 years that he had been in government service: Personal feelings and emotions don’t matter when one is in the business of serving the public.

It was the same principle he applied in getting through Mr. Aquino’s inauguration day last year—perhaps one of the biggest challenges he had to go through not only as a public servant but as a man.

“Did I feel bad? Yes, I did. After all, I am a human being. I have feelings. Did I get insulted? Yes, I was insulted. Did I get offended? Yes, I was offended. But did I show it? No, never,” Corona said.

“I put up a brave front there. I did it as a matter of duty. I went there and put up a semblance of respect and deference to the President of the Philippines. I thought it was my duty as Chief Justice to do that, regardless of my personal feelings.”

Corona has set aside that official snub, Mr. Aquino’s attacks on the court and the general aloofness of the Palace toward the tribunal, saying he supports President Aquino 100 percent.

“I wish him well. I wish his administration will succeed. If there is anything the Supreme Court can do to help move this country forward, we will do it. And as far as what happened in the past, that’s done. I don’t look back. It’s not being a good Christian to harp on things that hurt you or disappoint you,” Corona said.

With five more years of the Aquino administration, Corona is confident that he and the President would be able “to work well with each other.”

Corona will step down in 2018 when he reaches the mandatory retirement age of 70.

While many doubt the independence of the high court, Corona said he had proven that the tribunal was independent and that—ironically—this was his important achievement by far as Chief Justice.

He said it was what he had promised to ensure when he was appointed by Arroyo.

“I am happy that I was able to, in my own little way, prove that point that the judiciary should be independent. And it is,” Corona said.

Corona said there were cases in which Arroyo “ostensibly” had a stake but were junked by the high tribunal.

Corona apparently was referring to the dismissed petition of now resigned Ombudsman Merceditas Gutierrez to stop the impeachment proceedings against her at the House of Representatives.

Many believed that it was a defeat not just for Gutierrez but for Arroyo as well.

Corona insisted that the case involving the Philippine Truth Commission, which Mr. Aquino promised in his campaign to create in a bid to make Arroyo accountable for her alleged misdeeds, was decided purely on “its legal merits.”

“I have it on reliable information that people in the present administration knew that it was legally defective,” Corona said.

It was a misconception that he was “really very close” to Arroyo, he says. He asked to be appointed to the Supreme Court, he says, because he wanted to move out of the snake pit that is Malacañang.

Corona said his workload was “five times” more than what he did when he was an associate justice for eight years.

He also served as chief of staff and spokesperson of Arroyo when she was still the Vice President.

But he first worked in Malacañang under President Fidel Ramos in 1992 and rose to become chief presidential legal counsel and member of the Cabinet.

“When you are at the helm, you all of a sudden have to be sensitive to many things, like criticisms, demands for justice, the constituents think that you are [lacking] so you try to improve on those areas. These responsibilities, there’s no one to pass the buck now. The buck stops here,” he said.

Corona keeps a notebook in which he writes down priority concerns after learning about these from letters from all over the country, mostly from the poor and the forgotten. He takes time to read the letters.

“When you read these letters from these people, it’s the human side of you that takes over and it’s not easy emotionally. Somehow, you empathize with them, their problems. There’s no money, food, or justice,” Corona said.

Corona wants the public to know that “they have a Supreme Court they can trust.”

“I give them my word on that,” Corona says, regardless of what politicians hurl against the institution and the justices themselves.

Corona believes that magistrates should decide according to their conscience and shouldn’t be influenced by anything or anybody.

“I firmly believe in retribution. I still think they have a place in hell reserved for a judge or a justice who decides contrary to his conscience,” he said.