Gaza war is over, but Jerusalem violence remains 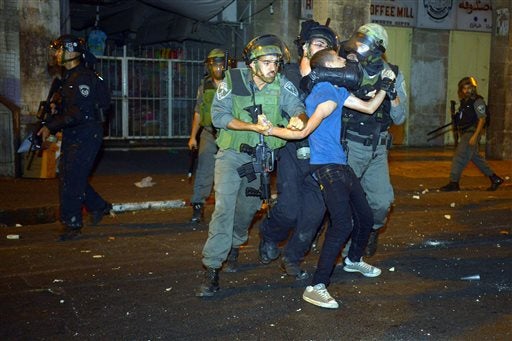 In this Monday, Sept. 8, 2014 photo Israeli border police officer detain a Palestinian teenager during clashes with Palestinian stone throwers that broke after the funeral of Mohammed Sunokrot in Jerusalem’s Old City. AP

JERUSALEM — While the world’s attention was focused on the airstrikes and rockets over Gaza and Israel this summer, a wave of violence hit the streets of Jerusalem — and is still roiling parts of this divided city at the core of the Israeli-Palestinian conflict.

The kidnapping and killing of three Israeli teens by Palestinians, and the apparent revenge killing of a Palestinian youth by Israelis in Jerusalem, sparked a chain of events that led to the 50-day war between Israel and Hamas militants in Gaza.

The same events also stoked violence in the streets of Jerusalem, and the Gaza war fed the turmoil.

Israel’s Shin Bet security service said there were seven times more violent Palestinian attacks on Israeli troops and civilians in Jerusalem in July and August than in the previous two months, and the Israeli rights group Ir Amim reported a spike in Israeli attacks on Palestinians, documenting nearly two dozen such cases.

Compared to the Israel-Gaza fighting, there were few conflict-related deaths and injuries in Jerusalem, and the violence has hardly been felt in the city’s Jewish neighborhoods, where cafes and shopping centers are bustling.

But some Israeli and Palestinian residents say they feel increasingly unsafe around each other.

“It’s going to explode in our faces, like the tunnels in Gaza,” said Yael Antebe, a Jerusalem councilwoman, referring to the underground passages Hamas militants used during the war to sneak into southern Israel and carry out attacks.

For their part, many Palestinians said they stay away from Jerusalem’s Jewish neighborhoods when tensions are high to avoid attacks or slurs. “I don’t want to be in a situation where I am attacked or even hear one bad word,” said Mohammed Salah Abu Khdeir, a Muslim cleric and Palestinian community activist.

In the most recent violence, masked Palestinians ransacked a gas station and set fire to a gas pump Sunday to avenge the death of a 16-year-old Palestinian who died from wounds he sustained in a clash with Israeli troops the previous week.

Israeli police say the youth was shot in the leg with a rubber-coated bullet and died from a head injury when he fell, but a Palestinian official said an autopsy showed he was killed from a rubber bullet to the head.

The gas station targeted was in French Hill, a well-to-do Jewish neighborhood in the city’s east that Israel captured in the 1967 Mideast war. Palestinians seek to establish an independent state with parts of east Jerusalem as its capital.

Officials in Jerusalem say Palestinians have attacked other contentious Jewish areas of the city in recent weeks, launching fireworks and firebombs at Jewish enclaves in Arab neighborhoods, and firing bullets at Israeli homes in Pisgat Zeev, a sprawling Jewish area Israel considers an integral part of Jerusalem but the international community considers an illegitimate settlement.

Palestinians hurled rocks, firebombs and paint at the city’s tram dozens of times this summer as it passed through the Shuafat neighborhood where the Palestinian teen was kidnapped, said Ozel Vatik, spokesman for Citypass, the tram operator.

Although the tram is fortified against rocks, ridership was down 20 percent in Jewish neighborhoods near Shuafat during those months, according to Citypass.

Palestinian demonstrators this summer have thrown rocks and firebombs at Israeli troops at numerous flashpoints in the city’s eastern sector, and troops have responded with rubber bullets and tear gas.

An Israeli security official said the uptick in Palestinian rioting was a spontaneous response to the high Palestinian death toll in Gaza during the war and the deaths of two Palestinian teens in Jerusalem, not violence directed by any militant group. He spoke on condition of anonymity because he was not permitted to discuss the matter publicly.

Israeli police carried out a large arrest sweep in the city, taking some 600 Arab residents into custody on suspicion of attacking police and participating in the riots, said police spokesman Micky Rosenfeld. About 150 of them have been charged, he said. Israelis were also arrested this summer for attacks against Arabs, Rosenfeld said, though he did not provide figures.

Antebe, the Jerusalem councilwoman, said the violence stems not only from recent tensions but from lack of law enforcement in Palestinian areas of the city.

“The country isn’t doing what it should to safeguard the security of the residents,” she said.

Abu Khdeir, the Palestinian cleric and community activist, said the violence is rooted in longtime neglect of Palestinian residents by both the Palestinian Authority and the Israeli municipality. School dropout rates and drug use are high, neighborhoods are crowded and youths have few open spaces to play, he said.

“With people like this, imagine what they feel inside,” Abu Khdeir said. “The problems are growing.”