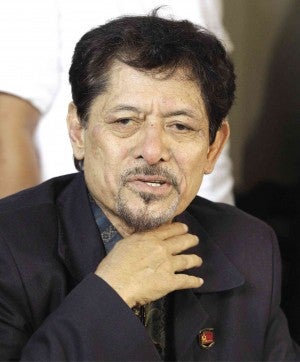 MANILA, Philippines – In line with its goal to have inclusive hearings on the draft Bangsamoro Basic Law (BBL), the Senate may invite Moro National Liberation Front (MNLF) founder Nur Misuari to one of its hearings, Senator Ferdinand “Bongbong” Marcos Jr. said Wednesday.

“Although he is still wanted, in a sense that he has a warrant against him, we are thinking about allowing the suspension of that to allow chairman Nur Misuari to come and speak and give us his idea,” Marcos, who is the chairman of the Senate committee on local government, said after the turnover of the draft BBL in Malacañang.

“Because if you remember, the Zamboanga uprising was precisely the product of the feeling that they were out of the (peace) process,” he explained.

Misuari and other members of his MNLF faction are still on the run a year after the so-called Zamboanga City siege, which resulted in the displacement of hundreds of thousands of families and the death of more than 200 people.

Marcos said they will hold the deliberations of the bill in provinces in Mindanao that are within the scope of the envisioned Bangsamoro political entity.

He said they will first hold a briefing for the members of the Senate and resource persons. The tentative schedule he gave was September 23.

Drilon confident Bangsamoro will be passed by Senate