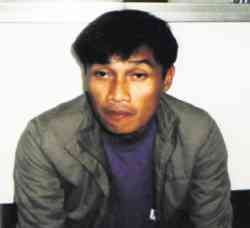 Following the retraction of the alleged gunman in the killing of international car racer Ferdinand “Enzo” Pastor, the lawyer and the father of his widow maintained there was nothing more to pin her down as a suspect in the June 12 murder.

A lawyer representing Dalia Guerrero Pastor appeared on Tuesday in the first preliminary investigation hearing of the case in the Department of Justice (DOJ), where her father spoke in defense of his daughter. Dalia herself, whom police had sued for parricide, did not show up.

“Dalia has everything to lose and nothing to gain by plotting to kill her husband. I believe my daughter is innocent. Legal means are at hand (and are) always open to her. Her life with (Enzo) was actually getting better whatever problems they had in the eight years of their marriage,” said Xavier Guerrero, who was allowed to read a two-page statement.

His voice breaking, Guerrero confirmed that “yes, they had marital problems,” but he did not elaborate. Dalia’s two children with Pastor were most important to her and that she would never do anything that would make them suffer or put their future in jeopardy, he stressed.

“They are God’s gift to Dalia and Enzo. The children are most important to Dalia. She would put her children’s welfare first before any decision,” the father said.

He described Dalia as an artistic, “free-spirited person who believes in free expression” and someone who loves sports cars, nature and adventure.

Guerrero called on the DOJ to clear her daughter if the evidence against her would not be “absolute beyond reasonable doubt.”

Speaking to reporters, Dalia’s lawyer Ruy Rondain maintained that “now that it’s gone, there’s no case at all unless there’s evidence independent of PO2 Edgar Angel’s [initial] admission. It’s the reason why we are here.”

Rondain was referring to Angel’s withdrawal of his extrajudicial affidavit admitting his role in the murder, in which the Pasay City police officer claimed that Dalia’s supposed lover, businessman Domingo “Sandy” De Guzman, hired him to kill the racer for P100,000 because he was a wife-beater.

Angel, who was arrested last month for drug peddling by the Quezon City Police District (QCPD), filed a new affidavit on Monday in the DOJ saying he was merely given a “script” to implicate Dalia and De Guzman in Pastor’s killing.

He said he cooperated with the QCPD because he was warned that all unsolved crimes in the city would be blamed on him and that he would be shot dead for trying to “grab a gun” from his police escort.

“The only evidence you have is that Angel implicated her (Dalia),” Rondain said, stressing that his client was “falsely accused.”

Rondain said Dalia chose not to attend Tuesday’s hearing because of the “media frenzy.”

Also in the hearing, De Guzman’s lawyer Dennis Manalo said he advised his client to defer the submission of his counteraffidavit in view of Angel’s retraction.

“I am at a loss as to what [my client has] to respond to,” he told the DOJ panel of prosecutors headed by Susan Villanueva.

Manalo, Rondain and the lawyers representing Pastor’s parents and the police were given copies of Angel’s retraction. Villanueva said she would issue a resolution tomorrow regarding Angel’s inquest, after which the parties would be given a week to comment.

The state prosecutor also set the submission of Dalia and De Guzman’s counteraffidavits on Oct. 6.