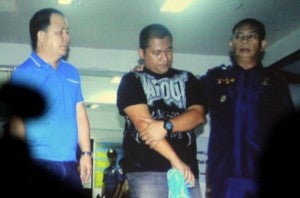 Inspector Joseph De Vera, one of the suspects in the Edsa abduction-robbery, is presented to media by police officials during a press conference at the Philippine National Police headquarters in Camp Crame. LYN RILLON

MANILA, Philippines–Who are the eight Quezon City policemen who allegedly abducted two men on Edsa, a brazen act that went viral through a photograph uploaded on Twitter last week?

Two of them are officers belonging to the Class of 2001 of the Philippine National Police Academy (PNPA), while the rest are police noncommissioned officers holding the ranks of PO2 and SPO1.

The Philippine National Police (PNP) said it was looking at the involvement of a ninth suspect, a police official dismissed in 2006 for similar kidnapping allegations.

Also implicated was former Insp. Marco Polo Estrera, who was dismissed from the PNP in 2006.

De Vera, 39, and Villanueva, 38, were classmates at the PNPA where they graduated with a Bachelor of Science degree in Public Safety in 2001.

De Vera, who was the officer in charge of the La Loma police station, was arrested before dawn on Sunday by the Eastern Police District director, Chief Supt. Abelardo Villacorta, and the National Capital Region Police Office (NCRPO) chief, Director Carmelo Valmoria.

Rodriguez was arrested by QCPD tracker teams later on Monday, according to the QCPD chief, Chief Supt. Richard Albano.

A source, who declined to be named for lack of authority to speak to media, said at least three of the wanted policemen were at the La Loma police station before dawn on Sunday when Villacorta and Valmoria paid a visit.

“The policemen were just looking at the visiting police officials from afar. They sensed that something was amiss since these officials were not from the QCPD. When they realized that they might be on to them, they slipped away with no one noticing,” the informant said.

While initially denying any knowledge of the incident, De Vera eventually admitted that they carried out an antinarcotics operation against their two victims, Ustadz Samanodin Abdul Gafur and Camal Mama, who were employees of a Lanao del Sur-based contractor of the Department of Public Works and Highways.

It was De Vera, apparently caught between the headlights, who scribbled down on a piece of paper the names of the eight other policemen, maintaining all the while that it was a legitimate operation.

However, he was unable to present any documents supporting this claim. There was no spot report or blotter entry nor any precoordination papers with the Philippine Drug Enforcement Agency (PDEA).

The victims claimed they were abducted at gunpoint and then brought to the La Loma police station where they were held for seven hours without being told of the charges against them. They were released at 9 p.m. of Sept. 1, with the broken windshield of their white Toyota Fortuner repaired.

However, the victims claimed that the P2 million from their boss, payment for heavy equipment they were supposed to buy, was allegedly taken by the policemen, and P119,000 withdrawn from their ATM cards.

De Vera underwent training in intelligence, surveillance, criminal investigation and detective management, jungle environment and survival, and civil disturbance management during his 13 years in the PNP. De Vera was also awarded several medals for efficiency, merit and commendation from 2002 to 2014.

His classmate, Villanueva, was also assigned to the La Loma police station in 2008 until 2011. He returned in 2012 as chief of the Station Investigation and Detective Management Service. His first assignment, like De Vera, was with the SAF in 2001 upon graduation from the PNP.

The oldest of the eight active policemen is 47-year-old Hachero, who entered the service in 1989 when the force was still known as the Integrated National Police. He has been assigned to Quezon City since 1993 and posted to La Loma police station in 2008.

Decatoria, 40, became a policeman in 1997. Before his assignment at the La Loma police station in February this year, he was assigned to the Project 4 and Masambong police stations, also in Quezon City. He was also with the district public safety battalion.

Datinguinoo, 28, is the youngest among the suspects. He entered the police service in 2009. He was with the NCRPO until 2011 after which he was transferred to the QCPD, where he stayed until 2013. In June last year, he joined the La Loma police station.

Estrera was dismissed from the PNP in 2006 in connection with the alleged abduction of drug suspects, demanding P100,000 for their release, under the guise of an antinarcotics operation.

De Vera was tagged after it was learned that his silver gray Toyota Hiace Commuter van with conduction sticker YF 9767 was one of four vehicles that blocked a white Toyota Fortuner bearing the two victims.

The blue Honda Civic with Plate No. ZJB 149, another vehicle in the viral photo, is owned by Estrera. A black Toyota Fortuner which also blocked the victims’ vehicle turned out to be Villanueva’s.

The license plates and conduction stickers of the vehicles were finally known after the PNP got surveillance camera footage along Edsa in a bid to trace the incident, which was photographed by a netizen and uploaded on Twitter minutes after the crime on Sept.  1.

Suspects in Edsa robbery rise to 12