Binay to explain pricing of Makati parking building next week

MANILA, Philippines — With the Senate inquiry producing more testimonies linking him to the alleged overpriced Makati City car park building, Vice President Jejomar Binay will go on the offensive early next week when he speaks about the issue anew before the nation.

Binay’s spokesperson, Cavite Governor Juanito Victor “Jonvic” Remulla said on Tuesday that the Vice President’s camp was still determining the venue where he would speak about the allegations against him “point by point.”

In a phone interview, Remulla said the Vice President and his advisers believed that the “country deserves”  to get his response to the testimonies in the Senate blue ribbon subcommittee hearings about the alleged overpricing in the construction of the Makati City car park building when he was still mayor.

Remulla stressed, however, that despite the noise created by the Senate committee hearing, “no facts” have been established in the controversy and that “everything (said against Binay) is conjecture.” 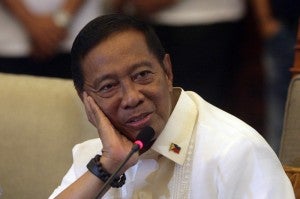 “(The Vice President said) he would not let next week pass without responding to the allegations against (him),” Remulla said in Filipino, this time speaking in a radio interview on Tuesday.

“He would show that all the allegations against him are silly and more importantly, he would like to say that the job of all leaders is to take care of their people and not to look for silliness and not to increase our survey ratings,” he also said in the same interview.

Former Makati City officials who served the Binay administration had linked him to the overpricing. Former Makati City Vice Mayor Ernesto Mercado had told the Senate hearing that he had pocketed kickbacks from the parking building and that it was likely that Binay did the same.

Mario Hechanova, former chief of Makati’s generals service division, on the other hand, alleged that the bidding for the car park building had been rigged and that Binay gave him and other procurement officials a monthly allowance to make sure that the then mayor’s favored contractor, Hillmarc Corp., got the project.

Binay’s camp have denied these allegations, turning the tables on Mercado and saying that he had led the group composed of two other city officials in rigging city projects.

Two weeks ago, the Vice President denied he and his family were involved in any anomaly in the city government and claimed that his detractors have been busy maligning him to derail his plan to run for president in the 2016 elections amid consistently high approval ratings from the public.

Remulla said that the Vice President and his family felt hurt and affected by the allegations.

On calls for the impeachment of the Vice President led by Albay Governor Joey Salceda, Remulla said in the phone interview this would be “the call of Congress.”  Binay’s spokesman added that the Vice President has continued to “trust that the political judgment (by Congress) on him will be the correct one.”

Asked whether Binay then would appear before the Senate hearing, he reiterated that the Senate has not formally invited the Vice President and thus, they would only respond when they get it.

In the radio interview, Remulla said he believed Salceda was not after Binay’s impeachment when he made the suggestion for the filing of an impeachment complaint against the Vice President.

He said Salceda just wanted to “end the silliness” because the latter did say that the nation was distracted by the accusations against Binay by the senators.

“For Governor Salceda, impeachment is the fastest way to end the issue,” Remulla said.

He said the Senate inquiry has disrupted somehow the governance in Makati after senators subpoenaed 20,000 documents which Makati City Mayor Jejomar Erwin Binay agreed to provide them.

Asked in the radio interview about Binay’s fallout with his former city officials, Remulla said that Binay had always put emphasis on work and that was why he started to question Mercado’s lifestyle when he heard that the latter would gamble in casinos and cockfights.

That was why Binay decided that his son could better run Makati City than Mercado, Remulla said.