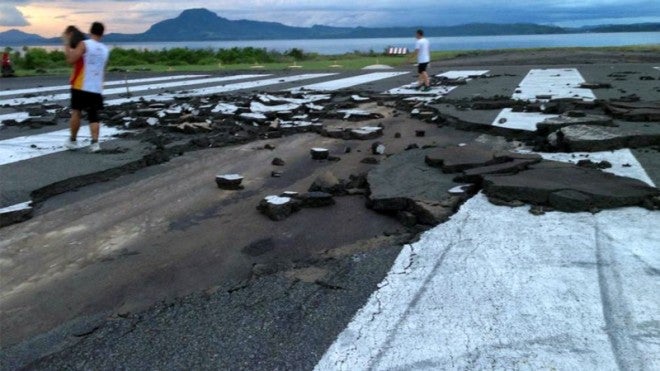 PHOTO COURTESY OF THE CIVIL AVIATION AUTHORITY OF THE PHILIPPINES

TACLOBAN CITY—Civil aviation authorities are likely to rush repair work on the runway of this city’s airport to finish the job in time for the arrival of Pope Francis in January next year, a top civil aviation official here said.

The damaged portion of the runway spans 40 meters.

The CAAP, according to Nagrama, is under pressure to finish the repair work and make sure it is finished in less than five months.

“This is our concern. We are doing this so that we will be ready when the Pope arrives. Definitely, we will work overtime so we can fast-track the repair,” said Nagrama.

He said the contractor, DM Marketing, also saw the urgency of finishing the job on time.

Weather condition and availability of materials, however, are likely to be factors in the pace of work,  Nagrama said.

Civil aviation authorities barred large aircraft, like Boeing 747s and Airbus, from using the airport during the repair work. Only propeller planes are allowed to use the airport in the meantime,  Nagrama said.

Nagrama said large aircraft were banned from the airport temporarily because these use the entire length of the 2,140-meter runway. Smaller aircraft use only half of the airport runway, he said.

Repair work on the runway could proceed even if smaller aircraft use it.

Karen Tiopes, tourism director, said the ban on large aircraft could affect tourism in Eastern Visayas, the city being the region’s gateway.

She, however, expressed optimism that alternative transportation modes, like sea transport to Ormoc City from Cebu City, would keep tourists coming. Smaller airports, like the one in Calbayog City in Samar province, are also alternative landing sites for planes carrying tourists.

“Repair of the runway is important. We cannot compromise the safety of our travelers,”  Tiopes said.

“This has to be done. Access to the region, though, will now be inconvenient. Travel time will be longer,” she said.

Fr. Amadeo Alvero, spokesperson for the Palo archdiocese that is involved in preparations for the papal visit next year, said the repair work “would be good for the safety of the Pope and the pilgrims during his visit.”