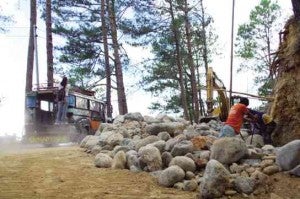 VARIOUS agencies, from the environment department to the Bases Conversion and Development Authority, have complained of this section of the Baguio Circumferential Road, which penetrates the Camp John Hay forest, and have occasionally displaced trees. The Department of Public Works and Highways has made changes recently so the road would not damage more trees. RICHARD BALONGLONG/INQUIRER NORTHERN LUZON FILE PHOTO

BAGUIO CITY—Taking its cue from the girdling of trees along Manila North Road (MNR) in Pangasinan province, Baguio City officials are strengthening the summer capital’s tree protection law to penalize this practice as the city council deliberates on an environment code.

Councilor Fred Bagbagen, chair of the council committee on environment, said Ordinance No. 5, series of 1990, punishes people who cut or damage trees in the city.

But the proposed environment code, which would be presented to the public for review at a summit, refines the ordinance further through a policy declaration defining what Baguio considers  acts that should not be committed on trees, Bagbagen said on Monday.

The proposed code punishes acts that “deliberately cause the death of pine trees,” such as girdling, or the stripping of bark from the trunk of a tree to cut off nutrients flowing to the branches.

Early this year, an environmental movement was formed due to the outrage over the girdling of trees meant to be cut to give way to the widening of  MNR in Pangasinan.

Last week, government agencies agreed to spare 437 trees that were meant to be cut along the 42-kilometer stretch of  MNR, which passes through the towns of Rosales, Villasis, Binalonan, Pozorrubio and Sison and Urdaneta City.

The Ilocos  office of the Department of Environment and Natural Resources (DENR) has been studying the condition of these trees, which  were girdled as early as February.

The proposed Baguio code punishes people who bore holes   into trees, who drive nails into a tree, and who bury a tree in concrete, but Bagbagen said the councilors may include other acts that were not considered when the 1990 tree protection law was passed.

For example, he said, the code may prosecute individuals, even government officials, who bulldoze trees.

In May 2012, DENR officials stopped the Department of Public Works and Highways (DPWH) from building portions of the Baguio circumferential road that passes through the Camp John Hay forests after government foresters discovered that the contractor had bulldozed 32 trees.

But in a July 2013 memorandum issued by Executive Secretary Paquito Ochoa Jr., Malacañang granted tree-cutting permits to the circumferential road, as well as other projects.

The order allowed the DPWH to remove up to 125 trees, all within the Camp John Hay forest reservation.

Cordelia Lacsamana, city environment officer, said the proposed code also says “the destruction, pruning, or any injury caused to pine trees of whatever size shall be considered an act of cutting or felling [the damaged tree].”

There have been proposals to increase the penalties for harming trees in Baguio, she said, but local laws may not exceed penal provisions imposed by national laws “so many of the fines we could impose cannot exceed P5,000.”

The proposed code imposes a P5,000 fine or imprisonment of at least a year, or both, for every pine tree illegally cut here.

“If the offender is a corporation or a juridical entity, the officer of such entity who ordered or allowed the commission of the offense shall be punished with the same penalty. If the offender is in the city government service, he shall, in addition to the [fines and imprisonment], be dismissed from office after due process,” it says.  Vincent Cabreza, Inquirer Northern Luzon