MANILA, Philippines–Albay Gov. Joey Salceda on Monday broached the idea that some may have in mind all along: Impeach Vice President Jejomar Binay over the costly Makati City parking building.

Given that accusations were piling up in a Senate inquiry that has diverted public attention from urgent issues, Salceda said the prudent thing to do was to file an impeachment complaint against the Vice President.

The impeachment process would put closure to the issue and refocus attention to urgent issues, such as countryside growth and urban traffic woes, Salceda told a press forum at the Diamond Hotel in Manila.

Besides, the Senate hearing on the allegedly overpriced P2.28-billion, 11-story building was expected to lead to the filing of an impeachment complaint, the outspoken governor said.

Testifying at the Senate hearing, an appraiser placed the cost of the Makati building at only P700 million using the cost of Grade A structures in the vicinity.

Over the Church-run Radyo Veritas, Manila Auxiliary Bishop Broderick Pabillo said the family of the Vice President must face and answer allegations of corruption, saying it is not enough for them to claim that they are victims of politicking.

“Binay and his family should answer the accusations hurled against them. They should not brush off corruption claims. It’s not enough to blame politicking,” said Pabillo, head of the Catholic Bishops’ Conference of the Philippines’ public affairs committee.

In Davao City, President Aquino on Monday steered clear of allegations that the Vice President had pocketed huge sums in connection with the construction of the car park building.

Speaking with reporters, the President neither supported nor rejected Binay’s contention that the Senate inquiry into the construction was driven purely by politics.

“At the end of the day, the truth will set us all free,” he said on the sidelines of the Mindanao Inclusive Agribusiness Program launch.

Aquino said he had no “knowledge as to the veracity of the accusations” against Binay, a front-runner in the 2016 presidential election based on recent surveys.

“The information that I have now, I am relying primarily on what the media have been putting out in the papers,” he said.

The Vice President, who has made no secret of his plans to seek the presidency in 2016, has dismissed the inquiry as a forum to vilify him since he enjoyed high approval ratings.

The Senate blue ribbon subcommittee intends to formally invite Binay to its hearing on the building, which began construction in 2007 when he was Makati mayor.

His son, Makati Mayor Jejomar Erwin “Junjun” Binay Jr., has defended the cost of the building that experts said was too high if compared with plush hotels and residential high-rises in the city. 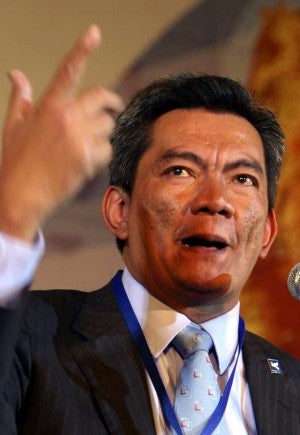 He had asserted this was world-class and the city’s version of a “green building.”

But experts who conducted an inspection of the building along with two senators claimed that the building was neither world-class nor green. Even Hilmarc’s, the company that constructed the building, said the structure was not world-class.

Hechanova and other procurement officials supposedly received a monthly allowance of P200,000 to manipulate the bidding and make sure that Binay’s favored contractor got the project.

Salceda said Binay should be open to the impeachment process, since the President himself faced impeachment complaints that were eventually junked by the House justice committee.

The complaints against Aquino stemmed from the voided economic stimulus mechanism, Disbursement Acceleration Program, and the Enhanced Defense Cooperation Agreement with the United States.

“We’re interested in the results of the investigation. But if you ask me—a lad from the province who regularly travels to Manila—from a cosmopolitan point of view, my judgment call is really for that (him) to be impeached,” Salceda said.

“The accusations are so gross. And therefore I’d rather go to the impeachment process so the Vice President can be cleansed,” he added. “That’s the correct process.”

After all, the senators, including Alan Peter Cayetano, have presented sufficient information on the allegations of overprice, and it is up to the House to take up any complaint if this is filed, the governor said.

Until that is filed, he said, the blue ribbon subcommittee could go ahead with its inquiry.

Buhay Rep. Lito Atienza defended Binay and indicated that the Senate inquiry should give way to the impeachment process.

“Why should Vice President Binay … go to a forum where the investigators are declared candidates: Senator (Antonio) Trillanes and Senator Cayetano?” Atienza told the forum.

“He has poor common sense if he goes there to be pilloried and prosecuted,” he added.

Cayetano, also a guest at the forum, rejected the idea of him filing an impeachment complaint since the senators sit as judges at impeachment trials of impeachable officials.

Sen. Nancy Binay, a daughter of the Vice President, maintained her position that an impeachment process was the proper process.

“I guess if there are allegations of corruption, what is the proper venue except through an impeachment complaint?” she told reporters on Monday.

Lawyer Romulo Macalintal said the Vice President could be impeached for an offense that he committed in another public position.

Macalintal recalled that then Chief Justice Renato Corona was convicted by the Senate in May 2012 for a past crime: nondisclosure of wealth in his statement of assets, liabilities and net worth.

But Macalintal said it would be prudent to defer to the Ombudsman investigation of the plunder charges filed against the Binay father and son over the alleged overprice of the building, whose outcome could be the basis for the filing of an impeachment complaint.

“The Ombudsman in its investigation could make a recommendation if this could be a ground for impeachment,” he said.

Sen. Aquilino Pimentel III, chair of the blue ribbon subcommittee investigating the parking building, said on Friday that the matter of whether the Vice President could be impeached for an offense he committed in another post should be the subject of study by legal experts and law students. He said he wasn’t prepared yet to make a comment on this.

The sooner the better

Salceda said the sooner the controversy was resolved, the better for Filipinos.

“There should be a resolution now so that when the campaign period kicks in, we will have a better basis for electing the next Philippine leader, and bring this country forward in the next 20 years. We can’t have another decade of lost inclusive growth,” he said.

He acknowledged Binay’s “stature as a political leader was certainly of national interest.”

Salceda said it was not for him to say that the Vice President had committed an impeachable offense.

“Anybody can file a complaint. It’s up to the committee to determine if there is an impeachable offense. If not, at least, we’re done with it,” he told reporters in an ambush interview.

Salceda said he was merely taking his cue from Senator Binay, who suggested the idea of impeaching her father, and that this wasn’t his original idea.

“I took it from there. The Binays are willing to go through the crucible of an impeachment rather than the media crucifixion of a Senate investigation. They prefer it because they have better chance there,” he said.

“But it doesn’t make things disappear. For us a nation, so we can find some closure, and therefore, we can focus on equally primordial issues, like inclusive growth—why is growth not filtering down. What about countryside growth? What about the traffic in Metro Manila?” he added.–With reports from Christian V. Esguerra and Tina G. Santos

Aquino on Senate probe on Binay: Truth will set us free