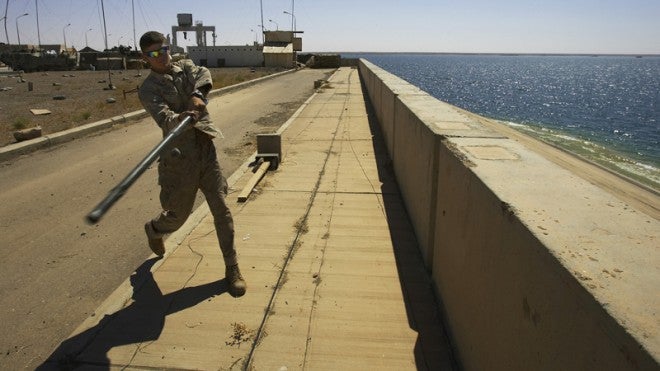 In this Sunday, May 29, 2005 file photo, U.S. Marine Lance Cpl. Andrew Bickerstaff of Satellite Beach, Florida, uses a tent pole to bat a rock off the Haditha Dam where his unit is based, 220 kilometers (140 miles) northwest of Baghdad. The U.S. military launched airstrikes Sunday around Haditha Dam in western Iraq, targeting Islamic State insurgents there for the first time in a move to prevent the group from capturing the vital dam. (AP Photo/Jacob Silberberg, File)

CAIRO — The head of the Arab League urged its members Sunday to confront Islamic State extremists “militarily and politically,” issuing an apparent call to arms as President Barack Obama prepares to go to lawmakers and the American public with his own plan to stop the militants.

Backing from the 22-country Arab League could provide crucial support across the Middle East for Obama’s effort to assemble an international coalition against the Islamic State, the marauding group that has conquered a swath of territory in Iraq and Syria and committed beheadings and mass killings to sow terror.

Already, NATO forces have agreed to take on the extremists.

Arab League chief Nabil Elaraby said that what is needed from Arab countries is a “clear and firm decision for a comprehensive confrontation” with “cancerous and terrorist” groups. The Arab League includes Egypt, Saudi Arabia, Jordan, Lebanon, Qatar and the United Arab Emirates.

Obama will meet with congressional leaders on Tuesday and then outline his plan to the war-weary American public Wednesday, the eve of the 13th anniversary of the Sept. 11, 2001, terror attacks.

“I just want the American people to understand the nature of the threat and how we’re going to deal with it and to have confidence that we’ll be able to deal with it,” Obama said in an interview broadcast Sunday on NBC’s “Meet the Press.”

It wasn’t immediately clear what steps the Arab League would take in supporting the West’s campaign against the Islamic State. And reaching a consensus on how to move could be complicated by Arab world rivalries and member countries’ different spheres of influence.

An Arab diplomat speaking to Egypt’s official MENA news agency said a resolution backing cooperation with the U.S. would go before members Sunday. He did not elaborate.

But a draft resolution obtained by The Associated Press offered only routine condemnation of terrorist groups operating in the region. It also called on member states to improve information-sharing and legal expertise in combating terrorism, and to prevent the paying of ransom to militants.

Elaraby himself noted that the Arab League’s member states have failed to help each other in the past when facing local armed groups, often because of disagreements and fear of being accused of meddling in one another’s affairs. Those challenges include Iraq as well as the militia violence now tearing Libya apart and other conflicts.

He called the Islamic State a challenge to the existence of Iraq and its neighbors. It is “one of the examples of the challenges that are violently shaking the Arab world, and one the Arab League, regrettably, has not been able to confront,” he said.

A decades-old joint Arab defense agreement states that member countries can act alone or collectively to ward off attack and restore peace by all means, including force. Elaraby, a longtime Egyptian diplomat, said an agreement to activate that clause in the 1950 agreement is needed.

Before the Arab League meeting, Elaraby spoke by telephone to U.S. Secretary of State John Kerry to discuss the Islamic State insurgents.

A senior State Department official, speaking on condition of anonymity because the person was not authorized to publicly discuss the private diplomatic conversation, said Kerry updated Elaraby on efforts to combat the insurgents.

“They discussed the need for the Arab League and its members to take a strong position in the coalition that is developing … and the importance of decisive action” to stop the flow of foreign fighters, disrupt the Islamic State’s financing and combat incitement, the official said.

Kerry said the military aspect is only one part of the effort, and more comprehensive coordination with Arab countries — combining law enforcement, intelligence, economic and diplomatic tools — is required, the official said.

Meanwhile, the U.S. said it launched airstrikes around Haditha Dam in western Iraq. U.S. officials said the offensive was an effort to beat back the militants from the dam, which remained under Iraqi control.

The militants could have opened or damaged the dam, flooding wide areas as far as Baghdad’s international airport, where hundreds of U.S. personnel are stationed, National Security Council spokeswoman Caitlin Hayden said.

U.S. Defense Secretary Chuck Hagel, traveling in Georgia, said the Iraqi government had asked the U.S. to launch the airstrikes.

Amid the fighting, the province’s governor and the mayor of Haditha were wounded by a roadside bomb, said Faleh al-Issawi, a member of Anbar’s provincial council. Gov. Ahmed al-Dulaimi later tweeted that he was not seriously hurt.