SC: Jardeleza was not disloyal 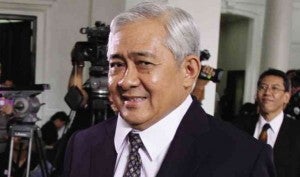 MANILA, Philippines–New Supreme Court Associate Justice Francis Jardeleza was not being disloyal nor did he betray the country with his position on the West Philippine Sea dispute, according to majority of the Supreme Court justices who had earlier ordered his reinclusion in the Judicial and Bar Council’s short list of nominees for the vacancy in the tribunal last month.

In a 35-page decision promulgated on Aug. 18 but released to the media only last Thursday, the high court voting 7-4 said Jardeleza’s position on the arbitration case against China when he was the solicitor general was but a legal strategy.

Chief Justice Ma. Lourdes Sereno, the JBC chair, had objected to Jardeleza’s nomination, citing his move to exclude the Taiwan-occupied island of Ligao (Itu Aba) from the 4,000-page memorial submitted by the Philippines to the Permanent Court of Arbitration in The Hague in the Netherlands last March.

The majority justices disallowed Sereno’s invocation of a provision in the JBC rules to block Jardeleza’s inclusion in the short list despite having received a majority vote from the seven-member council.

The rule states that when questions of integrity are raised against an applicant, all the JBC members must vote affirmatively for his nomination to push through.

As to Sereno’s allegations against Jardeleza’s integrity, the majority justices described them as a “disagreement in legal opinion” that often happens among legal experts.

“Consonantly, a lawyer is not an insurer of victory for clients he represents. An infallible grasp of legal principles and technique by a lawyer is a utopian ideal. Stripped of a clear showing of gross neglect, iniquity or immoral purpose, a strategy of a legal mind remains a legal tactic acceptable to some and deplorable to others,” the majority said.

The court added that “no connection was established linking his (Jardeleza’s) choice of a legal strategy to a treacherous intent to trounce upon the country’s interests or to betray the Constitution.”

“Verily, disagreement in legal opinion is but a normal, if not an essential, form of interaction among members of the legal community. A lawyer has complete discretion on what legal strategy to employ in a case entrusted to him provided that he lives up to his duty to serve his client with competence and diligence, and that he exert his best efforts to protect the interests of his client within the bounds of the law,” the majority justices said.

The high court also noted that President Aquino, who had the final say on the conduct of the country’s advocacy in the case and was in the best position to suspect a treacherous agenda, “has given no signs that Jardeleza’s action constituted disloyalty or a betrayal of the country’s trust and interest.”

The executive branch is represented in the JBC by Justice Secretary Leila de Lima.

The high court held that the decision of the JBC to exclude Jardeleza without informing him about, and getting his reply to, the accusations against him violated his right to due process.

The court said it “could not accept lock, stock and barrel” the argument that an applicant’s access to the rights afforded under the due process clause was discretionary on the part of the JBC, adding: “While the facets of criminal and administrative due process are not strictly applicable to JBC proceedings, their peculiarity is insufficient to justify the conclusion that due process is not demandable.”

The court also advised the JBC to revisit its “unanimity rule” on integrity and make clear who can invoke the provision and at what stage it can be applied.