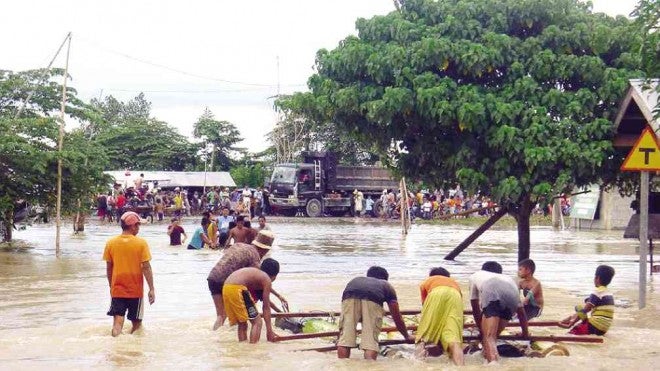 KABACAN, North Cotabato—Kagi Lidtungan, 83, says he has already lost track of how many times he and his family had to leave in the past five years their village of Boliok in nearby Pagalungan town, Maguindanao province.

“It’s as if we are just visiting and [we] leave when yet another flood drives us away,” Lidtungan, who has lived in Boliok since birth, told the Inquirer in the vernacular on Friday.

In this year alone, he said he and his fellow villagers had to flee thrice already, as the nearby Liguasan Marsh had swelled and the Rio Grande de Mindanao had dumped more water than the village could take.

“But I can’t do anything but return when the flood subsides,” he said, adding that like other villagers, he has no other place to live but there.

For the past two weeks, however, Lidtungan and his family of 15 had to share space with relatives in Barangay (village) Kayaga here.

“Even here, you can see how the floods have worsened over the years,” he said, pointing to a large patch of water that submerged what used to be rice paddies just last month.

Asked what he thought was the best explanation for the worsening floods, Lidtungan said: “When I was young, trees were [found] all over the village and deer roamed freely. Now, all you can see are the tips of houses in nearby villages.”

“The trees are gone,” he added.

The floods that had submerged low-lying Maguindanao areas have so far affected more than 150,000 individuals, according to the provincial disaster risk reduction and management council.

Two people had been confirmed killed in the floods.

The massive flooding has prompted the Maguindanao provincial board to declare on Friday a state of calamity.

Bobby Katambak, Maguindanao board member, said that with the declaration, the provincial government could now use its calamity fund for relief operations in the 26 of 36 municipalities that have been submerged by floods.

The marshland, the second-largest in the country, serves as a catch basin for floodwaters from provinces north and east of Maguindanao.

Before the declaration of state of a calamity, Katambak said the office of Maguindanao Gov. Esmael Mangudadatu, through the social welfare office, had been providing light relief items, such as rice, noodles and sardines.

In Kabacan town, where floodwaters have also affected 8,435 families, the town council also declared a state of calamity. Like nearby Pagalungan, Kabacan also has villages near the Liguasan Marsh and along the Rio Grande de Mindanao.

In Pikit town, also in North Cotabato, 29 villages were also flooded and classes had been suspended since Wednesday to prevent harm to schoolchildren, according to Tahira Kalantungan, municipal disaster risk reduction management officer.

The Sangguniang Bayan of Pikit on Thursday also placed the entire town under a state of calamity.

In Tulunan town, North Cotabato, classes had also been suspended since Wednesday in at least one village due to rising floodwaters. Tulunan is also close to the Liguasan Marsh. Reports from Allan Nawal, Edwin Fernandez and Williamor Magbanua, Inquirer Mindanao