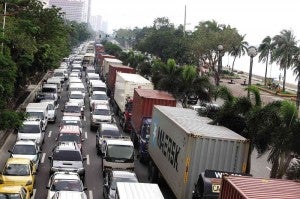 MANILA, Philippines – Understanding and cooperation. That was the request of Malacañang on Sunday to those involved in the port decongestion, which has been causing traffic jams in the metropolis.

(We are asking for additional understanding and cooperation of all sectors to solve the problem of congestions in the Port of Manila.)

He added that President Benigno Aquino III had already directed the creation of “Task Force Pantalan” to ensure smooth traffic to and from the port.

The announcement came after motorists plying the southbound lane of the North Luzon Expressway (NLEx) went through heavy traffic for several hours on Friday.

Coloma said the task force would be headed by the Philippine National Police with the coordination of the Metro Manila Development Authority, Philippine Ports Authority, Land Transportation Franchising Board, and local government units.

(Starting tomorrow, September 8, all overstaying cargo containers at the Port of Manila will be transferred to Subic Port. Those with overstaying containers will be fined P5,000 every day per container starting October 1, 2014.)

No conflict with Estrada

Coloma also said they are working with Manila Mayor Joseph Estrada amid reports that the former president was not willing to suspend the truck ban in the city.

(There is no conflict here…the City of Manila and all local governments are working together and coordinating with the national government about this.)

He said that to adhere to the truck ban, they agreed with the local officials to implement a one-truck lane for Roxas Boulevard and areas where the truck ban is being enforced to help ease traffic.

Malacañang  earlier said that the decongestion would last for two weeks.